Last year, I explored the idea of creating a position: sticky header component in Angular 7. This component used content protection and some "tracking pixels" to figure out when a position: sticky element was actually "stuck" to the edge of the viewport. This worked, but was a bit complicated. The other week, I was listening to - what I think - was Dave Rupert on the Shop Talk Show podcast, who mentioned that you can greatly simplify this approach by using a top: -1px on the sticky element so that you can easily observe the stuckness of the element based on its overlap with the browser viewport. This sounds so much easier than what I had done; so, I wanted to try it out in Angular 11.0.3.

When you specify that an element is position: sticky, you also have to provide an edge offset. This can be top, bottom, left or right; but, in the vast majority of most cases, this tends to be top. And, in any case, this edge offset determines the location of the sticky element relative to the overflow container when the element moves into a "stuck" state. So, for example, if you had the following CSS: 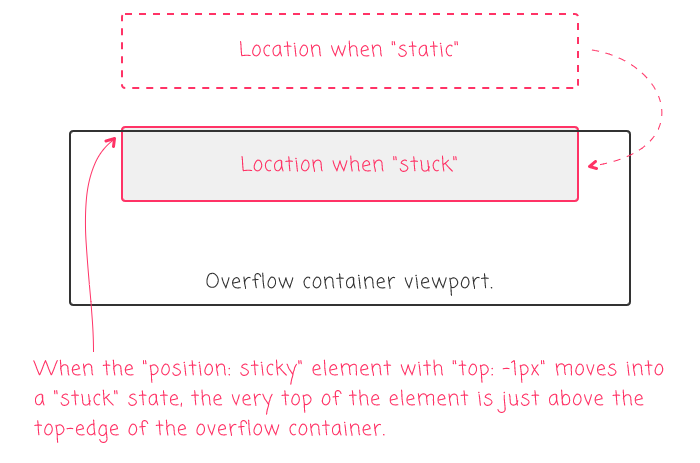 With this configuration, we can then use the IntersectionObserver API to change the state of the element when the top-edge is above the viewport and the bottom-edge is within the viewport. Or, in other words, when the host element is overlapping the top of the viewport (thanks to the top:-1px).

To experiment with this in Angular 11.0.3, I created a simple App component with the following HTML:

Within each section, there is a position: sticky header element. Each header element is going to use the selector, [stickyClass], to both target an Angular Directive and to provide the CSS class that should be applied to the host element when the element moves into a "stuck" state.

The LESS CSS for this HTML markup uses the top: -1px as we discussed above:

And now, the Angular directive - [stickyClass] - that uses the IntersectionObserver API to detect when that host element has moved into or out of a "stuck" state:

When we setup the IntersectionObserver API, notice that we're using the following threshold:

The thresholds are a bit confusing to me; but, what I think is going on here is the following:

Again, the meaning of the thresholds isn't 100% clear in my head; but, I definitely needed both in order to get this to work. And, whenever the IntersectionObserver callback is invoked, I'm looking at the bounding client rectangle to see if it overlapping with the edge of the viewport. That is when the top edge is less than zero and the bottom edge is greater than zero.

When the host element overlaps with the top edge, I add the stickyClass; and, when it's not overlapping, I remove the stickyClass. And, when we run this in the browser and scroll down, we get the following output:

As you can see, the header element is receiving the header--sticky CSS class as we scroll down the page!

Ultimately, it would just be awesome if the browser's would add some sort of :stuck CSS pseudo-selector. This would just make our lives way easier. But, until that happens, we have to bridge the gap with JavaScript. And, the IntersectionObserver API is a pretty good bridge for adding a sticky class to our overlapping elements in Angular 11.0.3.

This is pretty cool, and technically fairly straightforward; however, it doesn't always work. Since we're using the IntersectionObserver API and reacting to changes in the host element's interaction with the viewport, there is an edge-case in which our callback won't fire: if the host element is observed as overlapping with the bottom of the viewport; and then, on next observation is seen to be overlapping with the top of the viewport.

In this case, if the user is scrolling very fast (perhaps by using the Space Bar), then the "intersection" doesn't actually change - it just shifts the relative edge of the intersection. Meaning, the host element is "partially intersecting" in both successive checks - it just jumped immediately from a bottom intersection to a top intersection. Because of this, the callback doesn't fire on the second check and we never end-up adding the CSS class.

To counteract this edge-case, we could do something like add a setTimeout() and re-check the .getBoundingClientRect() for the entry in a future tick of the event loop. Or, we could just go back to using a more robust Angular component. Or, there might be a solution here that I'm not even seeing yet.

Or, we might just accept that there's an edge case that doesn't work very well and call it a day. It really depends on how bad the UI looks when the CSS class doesn't get applied.

Tweet This Fascinating post by @BenNadel - Using A Top Of -1px To Observe Position Sticky Intersection Changes In Angular 11.0.3 https://www.bennadel.com/go/3932