When you invoke the CFExecute tag in ColdFusion, there is no option to execute the given command from a particular working directory. That's why I recently looked at using the ProcessBuilder class to execute commands in ColdFusion. That said, the default community response to anyone who runs into a limitation with the CFExecute tag is generally, "Put your logic in a bash-script and then execute the bash-script.". I don't really know anything about bash scripting (the syntax looks utterly cryptic); so, I thought, it might be fun to try and create a bash script that will proxy arbitrary commands in order to execute them in a given working directory in Lucee CFML 5.2.9.31.

The goal here is to create a bash script that will take N-arguments in which the 1st argument is the working directory from which to evaluate the rest (2...N) of the arguments. So, instead of running something like:

In this case, we'd be telling the my-proxy command to execute ls -al things from within the path/to working directory. To hard-code this example as a bash script, we could write something like this:

The hard-coded version illustrates what we're trying to do; but, we want this concept to by dynamic such that we could run any command from any directory. To this end, I've created the following bash script, execute_from_directory.sh, through much trial and error:

CAUTION: Again, I have no experience with bash script. As such, please take this exploration with a grain of salt - a point of inspiration, not a source of truth!

Because we are using the special arguments array notation, "$@", instead of hard-coding anything, we should be able to pass-in an arbitrary set of arguments. I think. Again, I have next to no experience here.

Once I created this bash-script, I had to change the permissions to allow for execution:

To test this from the command-line, outside of ColdFusion, I tried to list out the files in my images directory - path/to/my-cool-images - using a combination of working directories and relative paths:

As you can see, I was able to execute the ls command from within the path/to working directory! Woot woot!

To test this from ColdFusion, I'm going to recreate my zip storage experiment; but, instead of using the ProcessBuilder class, I'm going to use the CFExecute tag to run the zip command through my execute_from_directory.sh bash script:

As you can see, I've created an executeFromDirectory() User-Defined Function (UDF) which takes, as its first argument, the working directory from which we are going to execute the rest of the commands. Then, instead of executing the zip command directly, we are proxying it through our bash script. 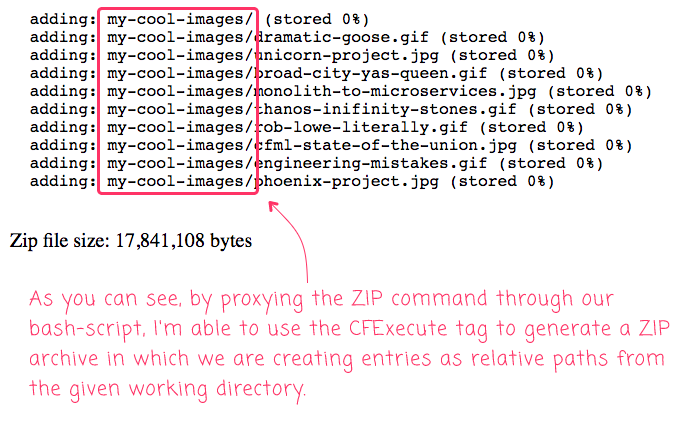 Very cool! It worked! As you can see from the zip debug output, the entries in the archive are based on the relative paths from the working directory that we passed to our proxy.

Now that I know that the ProcessBuilder class exists, I'll probably just go with that approach in the future. That said, it was exciting (and, honestly, very frustrating) for me to write my first real bash-script to allow the CFExecute tag to execute commands from a given working directory in Lucee CFML. Bash scripting seems.... crazy; but, it also seems something worth learning a bit more about.

Tweet This Provocative thoughts by @BenNadel - Running CFExecute From A Given Working Directory In Lucee CFML 5.2.9.31 https://www.bennadel.com/go/3812

FYI: I added the attribute directory to cfexecute which sets the working directory to the launched process. It's an experimental feature ATM but will be added officially in a future major version.

Woot woot woot!! This is very exciting! Thanks for digging into this :D

Here's an interesting follow-up post: using npm run-scripts from within Lucee CFML in order to leverage existing functionality; or, to just be able to have more control over the command-line tools:

This was fascinating to me because once your in the npm world, you have full control over the command-line, including cd 'ing into another working directory (which was the goal of this overall post). Just a fun experiment.

This is a much needed and much welcomed update. Probably one of the most exciting updates in 5.3.8 (for me).