In the last couple of months, there have been a few high-profile surveys about the state of JavaScript in 2018. And, on the various web-development podcasts that have discussed the results of said surveys, one datum that has been brought up several times is the relative growth of Vue.js. While Vue.js doesn't garner the absolute numbers that Angular and React do, its rate of adoption seems to be out-pacing the other front-end frameworks. As such, I thought it would be a fun Christmas treat to step outside of my Angular zone-of-comfort and take a look at Vue.js. To this end, I bought the book, Vue.js Up And Running: Building Accessible and Performant Web Apps by Callum Macrae. I read the book over the course of three leisurely days. And, as someone who has never looked at Vue.js before, I found Macrae's book easy to follow and quite enjoyable. 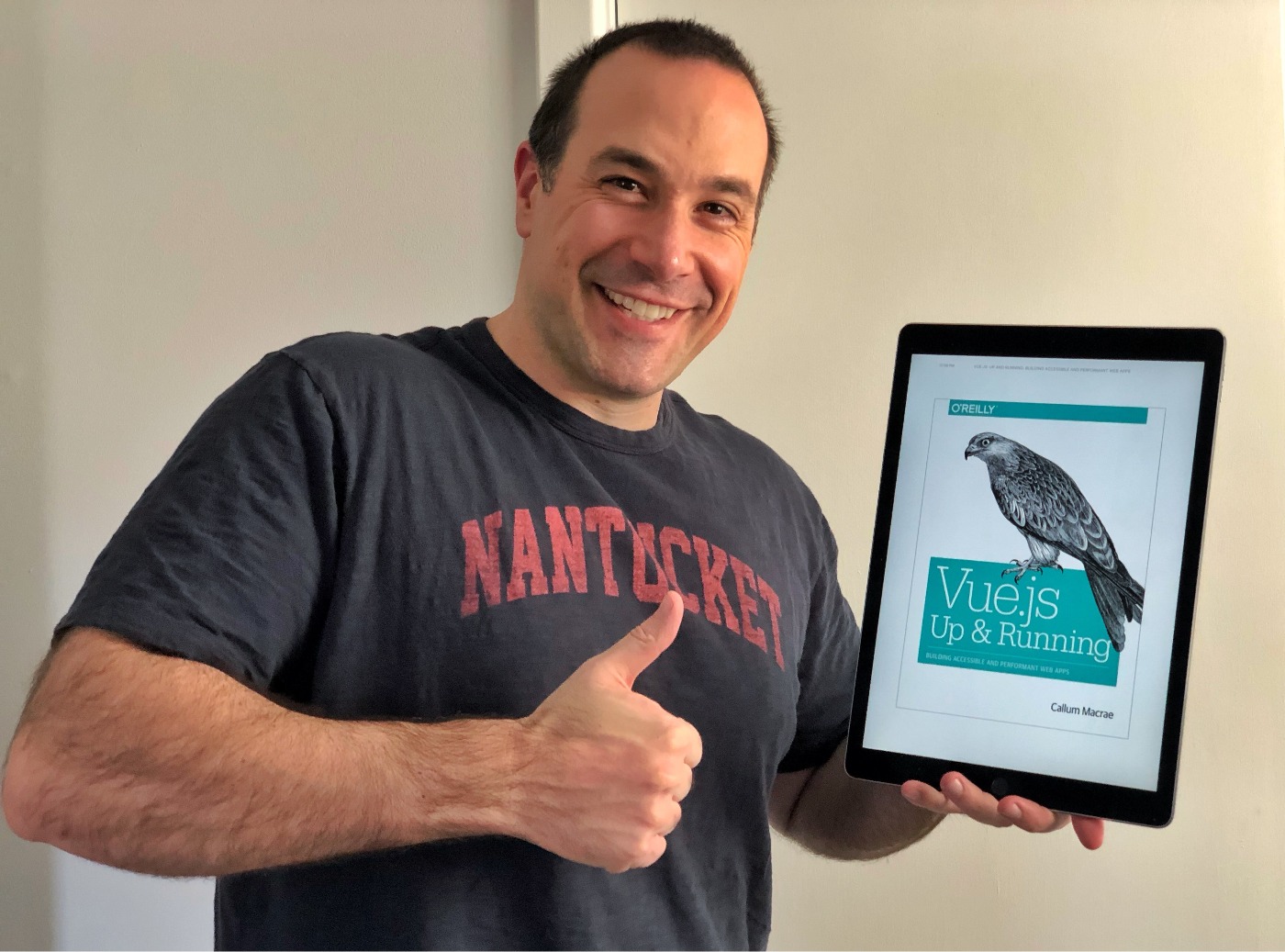 While this was my first real exposure to Vue.js, many of the concepts discussed in the book are built on top of concepts that should be familiar to Angular developers. In fact, Vue.js is often described as being either, "What Angular 2 should have been"; or, "The happy medium between Angular.js and React." As such, it's hard for me to know how a framework-agnostic reader would experience the book. I can only say that Macrae's exposition let me quickly map my existing Angular mental model onto the new Vue.js syntax.

The one notable absence from the book is the concept of Dependency-Injection. To me, Dependency-Injection (DI) is one of the keystones of Angular and Angular.js. So, when I didn't see it in the book, I assumed that Vue.js - like React - decided to forgo such functionality. It was only after I Googled for it that I found Dependency-Injection listed under "Handling Edge Cases" in the official Vue.js documentation.

It seems odd to me - as an Angular developer - that DI is documented as an "edge-case" and not as a core tenant. Since I am not familiar with the Vue.js community, I hesitate to extrapolate too much from this. But, it does make me wonder if dependency-injection is not the "idiomatic Vue.js solution" for Service discovery?

That said, I don't want to conflate my feelings about Vue.js with my feelings about Macrae's book. The book is solid! And, by the time I was done reading it, I honestly felt like I could start building a Vue.js application. So, I wanted to see if I could do exactly that using just the book as my guide.

Well, with the exception of the build process. In the book, Macrae does talk about using Webpack and the "vue-loader" to get it working. But, as is always my experience with a build process, it never works the first time. And, in fact, it took me about 5-hours (over 2-days) and lots of Googling to get a build process working.

Part of the problem was that I tried to get TypeScript working first. I absolutely love TypeScript; but, I ran into a bunch of issues getting it to work in conjunction with "Class based" components. It was only after I backed-out of TypeScript, and went with Babel.js and Vue.extend() components, that I finally got something working.

And, of course, I had to look-up Dependency-Injection.

But, those two topics aside, the rest of the following code is based completely on the teachings in the book. Or, more accurately, on my novice interpretation of the book. So please, if you take issue with the code - or if I say something that is completely wrong - don't let that reflect poorly on the book - that's just my unfrozen caveman lawyer brain.

As a simple "hello world" exploration, I created a list of friends that you could Add to and Delete from, respectively. And, in order to test a few Vue.js features, I encapsulated two parts of the user interface inside nested components:

These two components are so-called "presentation components" that operate solely on inputs and outputs. All logic and data is defined in the App component, which uses Dependency-Injection to locate a FriendService which, in turn, provides a synchronous look-up for the initial friend data.

First, let's look at the "main.js" file - this is then entry-point into the Vue.js application. It renders the root component into the document Body; and, it defines the name-based dependencies for subsequent dependency-injection:

While Vue.js provides dependency-injection, Vue.js doesn't appear to manage the instantiation of injectables. As such, I am explicitly instantiating the FriendService class and making is available as "friendService" to my nested components.

The first component to be rendered is the AppComponent. The AppComponent manages the actual Friend data and renders the intake form and the list of Friend instances. The two nested components - FriendFormComponent and FriendComponent - are registered locally to the component. Meaning, they are only matched against the AppComponent's template, not the application at large.

As you can see, while I am using the "Single File Component" approach, I am saving my CSS (or, LESS CSS in this case) as an external file. It still compiles down to a single file when we build the application. But, since I don't think that the CSS adds much to a demo, I try to tuck it away when possible. This is also how I write much of my Angular code.

In fact, part of why it took me so long to get a "build process" working is because I spent a lot of time trying (and failing) to figure out how to stuff the Template and the Style tag(s) into the "@Component()" meta-data provided by the "vue-class-component" decorator.

One of the things that I love about Angular is how unopinionated it is. In an Angular component, you can put the Template and Styles anywhere you want: keep them in the one class file; or, break them out into multiple files. Vue.js is much more opinionated in this matter (or so it would seem to a novice developer).

ASIDE: One thing that is really cool about Vue.js is that the scoped-CSS appears to be defined at compile time. This allows the CSS to be extracted into an external CSS file.

This is a feature that rubs me the wrong way. At first, it feels like this approach provides more flexibility; and, it does. But, once you start to use it, this flexibility makes it harder to reason about what the page is actually doing (and about why it may not be rendering what you expect).

To see this, let's look at the FriendFormComponent which renders a "form" tag as its host tag:

As you can see, this component renders a "form" tag as its host element. It then uses props and events to communicate with the AppComponent.

Similarly, the FriendComponent is also driven by props and events:

As you can see, these components are fairly simple. And, if we run this code in the browser, add a few friends and delete a few friends, we get the following output: 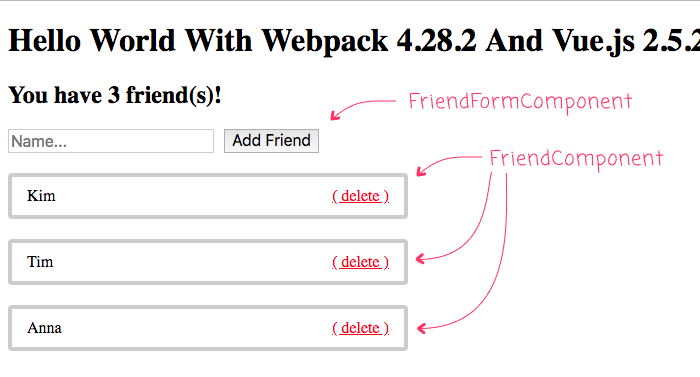 The total page-weight of this bundled and minified Vue.js application comes in at about 180Kb. This is less than half the size of a comparable Angular application - at least, with my fairly naive Webpack skills.

And, speaking of Webpack, here's my Webpack config, which I copied from my Angular project and then refactored for Vue.js:

To be clear - again - I suck at Webpack; but, this seems to compile and do the things.

I have no doubt that I made a lot of mistakes in this code. And, that I made decisions that would make a seasoned Vue.js developer cringe. But, considering that Vue.js Up And Running by Callum Macrae was my first exposure to Vue.js, I'm pretty excited that I got this far!

After reading this book, one of the Vue.js features that caught my eye was the "Event modifiers". For example, having click.self and click.once. I wanted to see if I could build this same concept into Angular:

Since Angular uses a plug-in system for its DOM-events, this is actually a fairly straightforward -- but hella fun -- exercise.

I had just been comparing Vue, React and Angular to decide which one I should learn. But with 10 years of jQuery experience it's not yet clear if Vue is a replacement for all the CSS and DOM manipulation that jQuery does so well. I think I need to understand more before buying a book on a specific framework. Sooo much to research!
Thanks for continuing to blog, Ben, always been a keen reader of yours.

Personally, I still use jQuery on my traditional request/response type websites (where I render a page, make a request, and render a new page). Really, I'd only use a framework like Vue or Angular if I was creating a single-page application.

So, for things like this blog (as an example), I just use CSS and jQuery to do all the things. And it works fairly well.

First, you rag on your webpack-fu, but I'm totally cribbing your use of an arrow function in defining your module.exports in your webpack config so (YOINK!) thanks for that! (Also, props on using webpack, it's pretty sweet!)

Second, the Angular/JS take on dependency injection always bugged the dickens out of me as unnecessarily confusing, so when I switched to Vue & started writing all my components as self-contained modules I naturally found myself gravitating away from that. I'm glad you posted an example of Vue's provide/inject here, but it feels overly complicated. Maybe it's because I've just started exploring Vuex that it appears to me to be a better solution -- you define a Vuex.Store, attach the state (whatever libraries) to it and then attach it to your root Vue instance, and from that point on whatever you attached to your Vuex.Store is available to all child components off your Vue instance. Plus, you get a clear interface within Vuex for managing state mutations, time-machine debugging, etc. Vuex might arguably be too much solution for smaller use-cases and I was hesitant to mention this at all, but then I saw Vue's own guidance on this (https://vuejs.org/v2/guide/components-edge-cases.html#Dependency-Injection), specifically the block about the "downsides to dependency injection".

At any rate, thanks for the Vue.js book review!

So, without dependency-injection, how do you locate the services that do things like interact with localStorage or make API calls to the remote server? Or, are you saying that is all handles at "actions" on the Vuex store? So, all of those would be actions you dispatch, and then the Vuex hooks deal with the external interactions and update the state?

To be fair, this is also the confusion that I have in React as well. I don't know how those devs get their services :D