Earlier this year, I took a stab at making a polyfill for Angular 5 that would record and restore scroll-offsets as a user navigated forwards and backwards through a Single-Page Application (SPA). In that exploration, I had to jump through a lot of hoops because Angular didn't differentiate between "imperative" navigation events and "popstate" navigation events. As of Angular 6, however, the NavigationStart event now contains navigationTrigger and popstate information that allows us to differentiate between the various modes of navigation. As such, I wanted to revisit and simplify my scroll-restoration polyfill using this newly-exposed information in Angular 7.0.4.

Back in Angular 5, I called this exploration a "Polyfill" because I had read that Angular was going to implement scroll-restoration behavior in a future release. As such, my polyfill only needed to bridge the gap between the current behavior and the future behavior. Fast-forward most of a year, however, and I see now that the term "polyfill" is misleading. Really what this is, is an opinionated Angular module that applies an augmented view of scroll retention and restoration in a data-driven, asynchronous Single-Page Application (SPA).

To be fair, Angular 6 did introduce a notion of scroll retention and restoration. However, it has a few limitations:

Given these limitations, I think there is still room in the Angular ecosystem for a scroll retention and restoration "polyfill", even if using the term loosely. As such, let's take a look at my updated approach that builds on top of the same functionality that was added in Angular 6 in order to enable the native scroll retention and restoration behavior.

Fundamentally, my approach is the same as Angular's approach. I record scroll offsets as the user navigates imperatively through the application. I then restore those scroll offsets as the user executes "popstate" events (ie, Back and Forward). The difference - at a high level - is that I listen for "scroll" events on the entire DOM (Document Object Model) whereas Angular only looks at the scroll position of the primary viewport at navigation time. This difference is what allows me to apply scroll retention and restoration behavior to all scrollable elements.

The bulk of the logic in my "polyfill" is in the RetainScrollPolyfillService. But, it's a somewhat large service, so let's break it down by responsibility. First, the service listens for "scroll" events in the current DOM and keeps track of the scrollable DOM references:

As you can see, as the user scrolls various elements in the application, I grab the target from each scroll event and stuff it into a Set call scrolledElements. This could be the Window object; it could be a secondary router-outlet instance; or, any other element with some sort of overflow behavior. I use a service call DomUtils in order to encapsulate the differences between all of these target types.

I think most of the code here is somewhat self-explanatory (assuming I named things well). But, the part about "pulling offsets forward" is probably not obvious. And, this is where it's important to understand that only part of the page needs to change when you navigate with the Router.

And, when the user does return to a previous state (via a popstate navigation), we have to take all of those recorded offsets and apply them back to the DOM (Document Object Model). This is where my polyfill gets very opinionated. Unlike the native scroll restoration behavior, this step is not a point-in-time. Instead, it continues to try and apply offsets to the DOM for a configured amount of time. This way, the application has wiggle-room in how it loads data into the application.

When a page state needs to be restored, I call .applyPageStateToDom():

As you can see, I setup an interval that tries to restore the previous page state. The cadence and duration of this interval are configured via pollCadence and pollDuration, respectively. These have default values; but, can be overridden when importing the polyfill module in your Angular application.

That's the bulk of the polyfill logic. The rest of the code in that service is just utility code.

The only other thing worth noting is that the polyfill also provides a directive that binds to Angular's router-outlet. It does this in lieu of ever scrolling back to the top of page. As each router-outlet deactivates and then activates, my router-outlet directive records the offset of each ancestor element. When the new view is injected as a sibling to the router-outlet, my directive reinstates the ancestor offsets such that the DOM is left at the offset that it had right before the view was injected.

In other words, my polyfill never scroll to the "top of the page" - it scrolls to the "top of the router-outlet". This is how it "differentiates" between a primary page navigation and something like a Tabbed-view navigation. It's not a perfect approach. But, it's a step in the right direction:

Now, when we run this code, and navigate backwards and forward through the application, we can see the scroll offsets being recorded and restored: 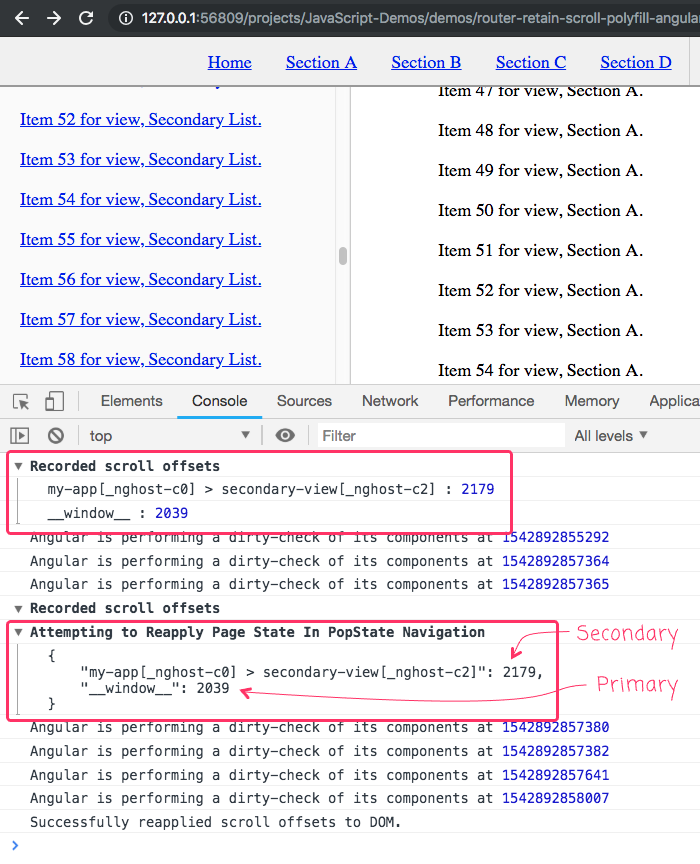 ASIDE: Right now, the CSS selector for the scrolled element is calculated by walking up the DOM tree and assumes that simulated CSS encapsulation attributes are in place. In the future, I think I could configure the DomUtils to look for explicit attributes or IDs.

To get a sense of how the native Angular behavior and my scroll-retention polyfill diverge, I've built this demo both with and without the polyfill. This will allow you to see how differently the two applications behave:

There's no doubt that recording and restoring scroll offsets is a sticky matter. My polyfill isn't a full solution; but, it is a step in a powerful direction. Especially considering the fact that the Angular application basically knows nothing about it - it's just a drop-in module. If nothing else, hopefully this was just some interesting code to noodle on.

Tweet This Great article by @BenNadel - Restoring And Resetting The Scroll Position Using The NavigationStart Event In Angular 7.0.4 https://www.bennadel.com/go/3534

It has really helped. A great solution. Kudos ! :D

Thanks for sharing. I tried to implement it as a module to get over this native angular scroll positioning issue. However, I discovered if my list from ngFor includes html img srs tag the scroll wont work by some reason it has scrolled but to the wrong scrollY ... If I got rid of html img src tag, everything worked perfectly ~ Could you please provide some ideas for me?

It sounds like the img tags don't have an explicit height defined? So, the scroll is probably happening before the img tags have loaded. And, is "correct" at that point. However, a moment later, the img tags load, and the image content alters the offset of the thing you were scrolling-to.

I have a similar issue on my blog :( At runtime, I replace my code-snippets with a GitHub Gist. However, that happens after I scroll the user to the Reply form, which then messes up the offset, and leaves the user scrolled to a weird place.

Basically, anytime you change the height of the content after the scroll has taken place, it can be a little confusing to the user.

Thanks for sharing. I have tried your solution to scroll the page on top while navigating from one page to another. I am using the router.navigate() method to route between different pages on button click. The issue which I am facing is that the scroll is calculating the initial height on the starting or landing page of the application and follows the same while navigating to another page. I have also tried scrollPositionRestoration and similar solutions from stack overflow but nothing seems to be working. I am using angular version 7.3.9. Any help will be appreciated.

Have you tried using the scrollPositionRestoration option for the Router configuration:

It should set the window offset to 0,0 at the start of each navigation. It was only introduced in Angular 5 (I think), so it's possible it was added after you started your project. This stuff is so hard to keep on top of!

Great video! My issue is the opposite. I'm trying to force each page to load at the top, {scrollPositionRestoration: 'top' }. Some of them load in the middle an the user needs to scroll to the top to see the content beginning.

Any thoughts? Code below:

To be clear, you are talking about "new navigations" (ie, clicking on a routerLink) and not back/forward navigations?

Hello Ben,
Thanks for sharing, please explain what is DomUtils