In the last couple of days, I've started to dig into the lazy-loading of feature modules in Angular 6. With lazy-loading, segments of the code-base get loaded on-demand as the user navigates to the relevant areas of the application. The Angular router, however, provides a configuration that can preload these lazy-loaded feature modules such that they don't impact your application's "time to first interaction"; but, in such a way that it allows the code to be made available within the application before the user even needs it. To explore this concept, I wanted to take my previous demo of the "loading indicator" for lazy-loading modules and add the PreloadAllModules router configuration.

Out of the box, Angular 6.1.9 provides two preloading strategies: NoPreloading, which is the default, and PreloadAllModules. By using the PreloadAllModules strategy, the Angular router will start making HTTP requests to load lazy-loaded feature modules as soon as the Angular application has been successfully bootstrapped. The hope is, of course, that any given lazy-loaded module is then already loaded by the time the user wants to engage with the associated area of the application.

NOTE: You can also define your own custom preloading strategies if you want more granular control over which modules gets loaded and when.

To use the PreloadAllModules strategy, all we have to do is import it and then provide it as part of the RouterModule.forRoot() service options in our Application module:

That's literally all there is to it! At this point, any lazy-loaded feature modules will get preloaded in the Angular application shortly after the application becomes responsive.

In my last post, I talked about how the Router emits events related to lazy-loaded modules:

Because of this new timing characteristic, I wanted to take my previous "loading indicator" demo and update it such that it didn't show the "loading module" indicator during the preloading process on a slow network connection. To do this, I had to update my logic to take active navigation into account. Now, instead of just monitoring the config events, I'm also monitoring the navigation Start and End (and Error and Cancel) events as well:

However, if both a config request is pending and an active navigation request is in play, then the chances are good that the lazy-loading module is being loaded because of said navigation. In such a scenario, I do want to show the "loading" indicator to the user in order to provide feedback with regard to the application's responsiveness

There is a chance the the navigation is unrelated to the preloading of Angular modules. However, since I am providing a slight delay in the actual rendering of the indicator (in the CSS), the navigation state should change before the loading indicator is flashed on the screen.

To refamiliarize you the demo, here is the HTML view associated with the above component:

And, here is the LESS / CSS that styles this view:

As you can see, even when the [ngIf] template directive renders the loading indicator in the application, the CSS animation provides 100ms delay before it actually displays to the user. This delay balances-out the fuzzy association of the navigation events to the remote configuration loading events.

Now, if I switch my Chrome Developer network tools to slow a connection and then load the root of the application, we get the following browser output: 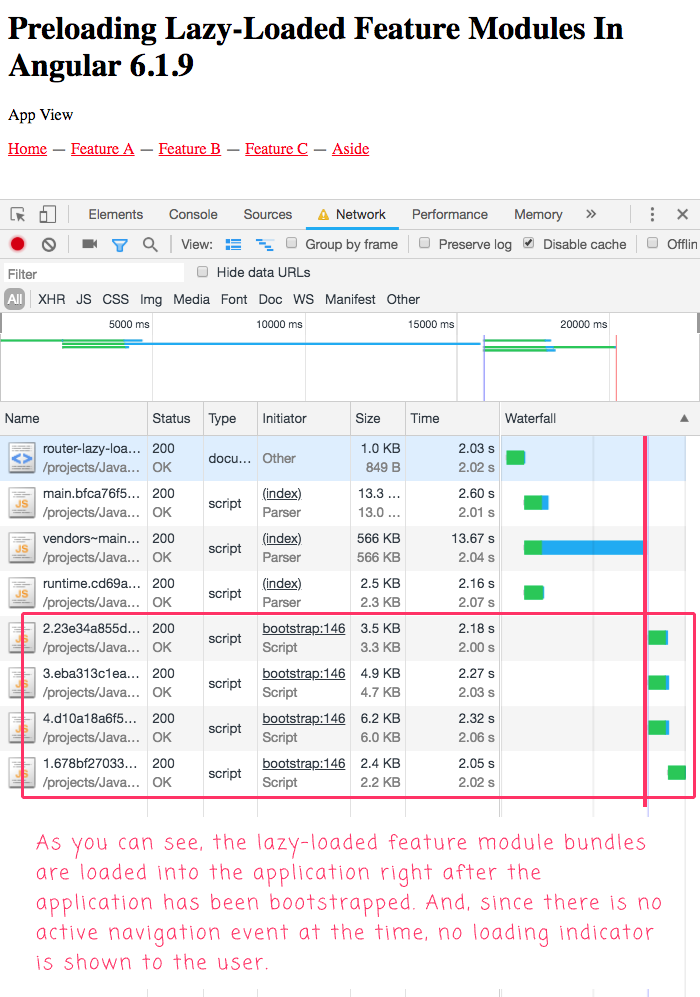 As you can see, the lazy-loaded feature modules are preloaded into the application right after the application is bootstrapped. And, since there is no active navigation, our counter-logic prevents the loading indicator from being shown. 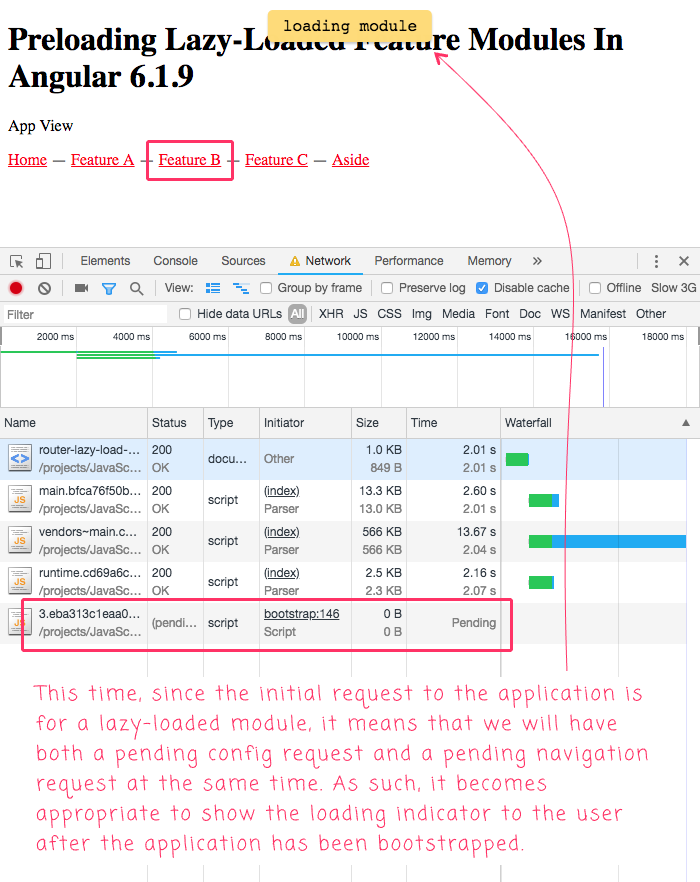 As you can see, if the user's initial request is to a lazy-loaded feature module within the application, then the Angular router will perform an active navigation after the application has been bootstrapped. As such, the loading indicator will be shown to the user, as expected and desired.

For reference, here is my full App module code:

For the rest of the code, which is less relevant to the focus of this app, you can use the GitHub links above.

I know that the Angular router has some quirks; but, I've been a huge fan of what they are trying to do, especially with secondary routes. Now, seeing how easy it is to preload lazy-loaded feature modules in an Angular 6.1.9 application just makes me all the more excited.

Interesting question. Most of the time, I'm only trying to observe router-changes in the context of a particular router-outlet (such as when listening for param changes to reload local data). What are you trying to achieve? If I know your desired outcome, maybe I can think more clearly about a possible solution?

Seriously, every time I'm researching some tough problem you name comes up with a blog post about that very topic. :)

I have a few question though. I created an HTTP interceptor, which shows and hides spinner when a HTTP request starts or finishes. Is there any way one can combine the logics you wrote with the one I wrote? I tried them separately, but they collide sometimes, and the spinner doesn't hide when it should.

I found the reason why the spinner doesn't hide sometimes. RouteConfigLoadEnd doesn't get triggered in case of auth guard errors.

Anyway, the idea of creating a logics of showing spinner for both HTTP requests and router events combined would be nice one to produce.