One of the most compelling features of Angular is that you can define custom DOM (Document Object Model) event plug-ins that can run arbitrary event logic outside of the main Angular Zone. This means that you can both encapsulate complex event logic and ensure that Angular's change-detection algorithm is only triggered if certain conditions are met. In the past, I've used this feature to create "clickoutside" event bindings and multi-priority global-key bindings. This morning, I want to use the same approach to create a "directclick" event to capture clicks on a given element but only if the click event did not originate from within a descendant element.

Angular already has the ability to bind to (click) events. But, with the way the DOM (Document Object Model) is structured, a (click) event binding on an element will intercept direct clicks on the given element as well as any clicking on any descendant node within the given element. If we didn't want to respond to descendant-node events, we could theoretically inject the ElementRef into our Angular component and then check to see if the (click) target matches the ElementRef.nativeElement; but, that's wicked janky and overly DOM-focused.

Instead, we can define a custom DOM events plug-in, (directclick), that performs all of that logic for us. And, does so in a way that can be used globally (by other elements) and reduces the number of change-detection cycles that our application has to run. To do this, we just need to implement the EventManagerPlugin API and add our implementation to the EVENT_MANAGER_PLUGINS provider collection at application bootstrap.

Inside of our custom DOM Events plug-in, it's worth considering Angular's interaction with Zone.js. Each of our Angular components contains a view-model and a template. As the view-model changes throughout the life-cycle of the application, Angular reconciles the template against the view-model using change-detection.

By default, all of the core DOM-event bindings, like (click), will trigger a change-detection cycle because the core event handlers are bound inside of Angular's Zone.js instance. This makes sense when there is a one-to-one mapping of events to event-handler invocations. However, in the case of something like a (directclick), where not every "click" event will precipitate an associated "directclick" event, it doesn't make sense to trigger a change-detection cycle for every click.

Here is my implementation of a (directclick) DOM event plug-in:

There's not too much going on here. As you can see inside of our addEventListener() method, we're using zone.runOutsideAngular() to bind the base "click" event-handler. This will ensure that this plug-in's click events won't trigger a change-detection digest by default. Then, when the proper conditions have been met - when the event target is the same as the bound element - we re-enter Angular's Zone.js instance using zone.run(). This will ensure that a change-detection digest is triggered after the (directclick) event-handler is invoked.

To use this custom DOM event plug-in, we have to add it to the EVENT_MANAGER_PLUGINS multi-provider in our root application module:

Once we've registered our DOM events plug-in, we can start to use it within our Angular components. To demonstrate, I'm going to use it in my root component's host bindings. This way, we can respond to direct-clicks on the root component, but ignore clicks on any elements contained within the root component. And, to drive home the interaction between event-bindings and change-detection digests, I'm going to log all calls to the ngDoCheck() life-cycle method so we can see which kind of click events trigger change-detection. 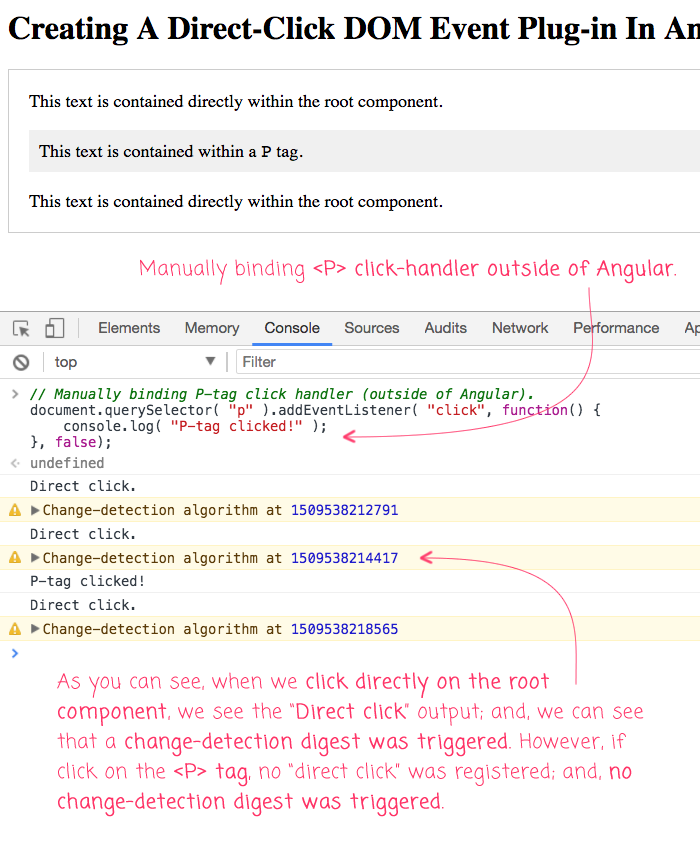 As you can see from this screenshot, our (directclick) event binding was able to invoke our component's event handler. And, we can see from the ngDoCheck() life-cycle hook that change-detection was triggered as a result of the event. However, what you can't really see unless you watch the video is that no change-detection cycle was triggered if I clicked on the P-tag (since it didn't constitute a "direct" click on the host element).

For the most part, Angular's change-detection algorithm "just works." This is because Angular uses Zone.js to register callbacks that may produce a view-model change. When we create custom DOM events, like (directclick), we can step outside of Angular's Zone.js instance in order to make sure that the overhead of change-detection is only incurred when it is necessary. And, we get to encapsulate a whole lot of boiler-plate logic as well, which is hella sweet!

I'am surprised there isn't a single comment on Github?

I am not sure what you mean? Where on GitHub?

This is a cool feature. I tried to create a plugin for capture resize on the root component but it's not getting triggered. Not sure what I'm missing, there're no errors.

Running angular 5
This is what I have in the plugin:
export class ElementResizePlugin {
public manager: EventManager;
private static EVENT_NAME: string = 'elementResize';

As such, it's not as easy as just listening to a given event, unfortunately. I think I read somewhere that a future specification might add some sort of resize event to the Element nodes; but, I don't believe that time is now.