CAUTION: This is primarily a "note to self" post.

Yesterday, as I was recording the video for my Medium-inspired (textSelect) Angular directive, it occurred to me that I didn't have a great mental model for Angular Zone / NgZone / zone.js. I knew that I could bind an event-handler outside of the Angular Zone; and, that its handler would run outside of the zone; but, I wasn't 100% confident that I knew how subsequent bindings would operate. As such, I wanted to perform a quick sanity check to see how bindings within bindings would interact with the Angular Zone service provider.

As you can see, I'm logging calls to the ngDoCheck() Directive life-cycle method. This method will get called during Angular's change-detection digest, which should give us insight into when our interactions trigger change-detection (ie, which actions interact with handlers that were bound inside the Angular Zone). And, when we run this in the browser and click around, we get the following output: 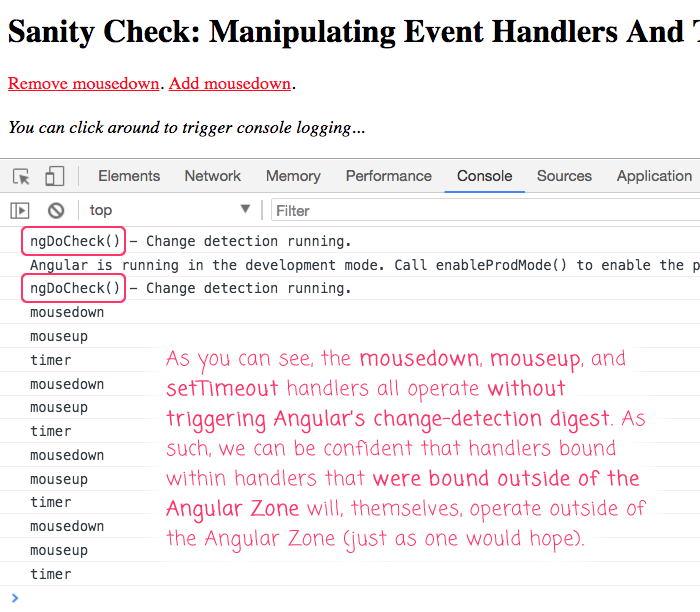 To be clear, this is what is supposed to happen. But, I wasn't 100% confident in the cascading feature of handlers bound within a given Zone.js instance. This clears it up nicely.

Tweet This Groovy post by @BenNadel - Sanity Check: Manipulating Event Handlers And Timers Outside Of NgZone In Angular 5.2.10 https://www.bennadel.com/go/3440