Earlier today, I examined an incident in which MySQL's MRR (Multi-Range Read) optimization inadvertently caused a partial database outage. Part of what made debugging the incident frustrating was the fact that the poorly-performing queries showed up in MySQL's slow_log table at the very end of the incident window despite the fact that they clearly started the incident. I have long suspected that the "start_time" column of the slow_log table was misleading; but, this past debugging session finally gave me the motivation to dig into the mechanics of the slow query log and build a better mental model for what the "start_time" column actually represents.

Testing the "start_time" column is fairly straightforward. All we have to do is run two SLEEP() queries back-to-back and see how the "start_time" is reported in the slow query log. Assuming that we use the following queries:

As you can see, for this database connection, we're enabling the slow query log and we're setting its threshold to 1-second (the default is 10-seconds). This way, both of our SLEEP() queries will be captured. And, when we run this test in the database, we get the following output: 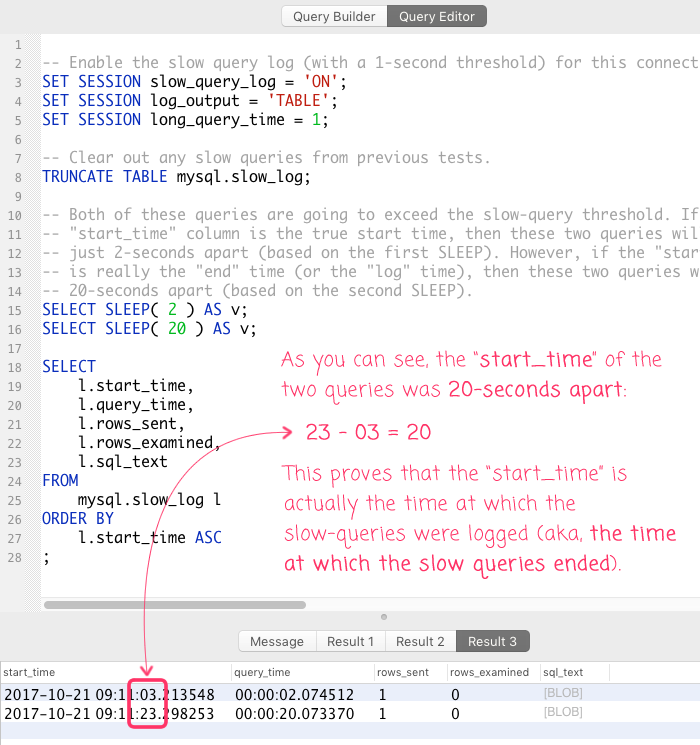 As you can see, the "start_time" of the two queries, as reported by MySQL's slow query log, is 20-seconds apart. This proves that the "start_time" is, in fact, the "end" time or the "log" time of the queries. This also explains why long-running queries that caused an incident wouldn't actually show up in the slow_log until much later in the incident's timeline.

At work, I use a time-boxed query to search through MySQL's slow query log so that I can look at queries during an incident window. Given this new insight into the meaning of the "start_time" column, I'm going to update my go-to debugging query to include a normalized start time. This way, I'll see slow queries in the order in which they were initiated, not in the order in which they returned:

As you can see, I'm ordering the query based on the delta of the two columns ("start_time" and "query_time"):

Then, in the SELECT clause, I'm formatting this delta as a nice, easy-to-read time-stamp: