Right now, I'm trying to muscle my way though the odyssey that is "Designing Data-Intensive Applications". In the book, author Martin Kleppmann discusses database locking; and, posits that applications should really retry Transactions that are timed-out due to a lock. This same sentiment - on retrying transactions - has also been echoed by members of the InVision App data team. As such, I wanted to start thinking about how this might be accomplished. But, in order to restart transactions, I first had to figure out how to force a Transaction lock timeout. And, since I've had recent luck with the MySQL SLEEP() function, I thought maybe I could use SLEEP() along with the database server variable, innodb_lock_wait_timeout, to force lock time-outs in a controlled manner.

To cause a Transaction lock timeout in MySQL, I needed to get two parallel queries to try and update the same InnoDB record at the same time. In order to avoid having to create "production" conditions with load-testing, I'm simply using ColdFusion's CFThread tag to spawn an asynchronous query; then, I'm using the SLEEP() function in that asynchronous query in order to ensure that the UPDATE is held open long enough for a subsequent query in the parent page to create a race-condition.

By default, MySQL will wait 50-seconds for a transaction lock before throwing an error. For testing purposes, this is a painful amount of time. Luckily, this duration is based on the MySQL database variable, innodb_lock_wait_timeout, which can be set at both the GLOBAL and SESSION level. As such, I'm going to be setting the SESSION-scoped value to be 2-seconds:

Now, let's look at the experiment:

Since I'm expecting the second query to throw an error, I'm wrapping it in a Try / Catch block. In this case, I actually have two CFCatch tags because I wanted to see if I could catch the underlying MySQL error, MySQLTransactionRollbackException. It turns out that I can't because ColdFusion wraps all of the database errors in an exception of type "Database". We can, however, catch errors of type "Database" and then inspect the errorCode to see if the caught error is a transaction timeout error. 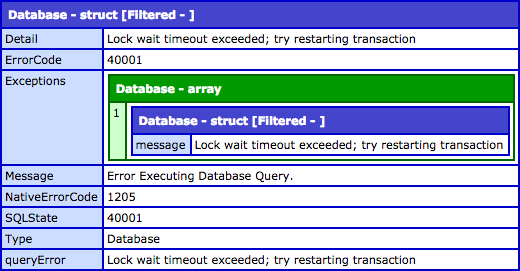 As you can see, we were able to trigger a transaction lock timeout in a predictable manner with ColdFusion and MySQL. And, we were able to catch and inspect that error. Now that I know that I can do this on-demand, I can start to think about how I might design a data-access layer that generically handles and retries transaction lock timeouts (I think I can smell some tasty meta-programming in my future!).

Tweet This Great article by @BenNadel - Using SLEEP() And innodb_lock_wait_timeout To Force Transaction Lock Timeouts In ColdFusion And MySQL https://www.bennadel.com/go/3307

I used to think this would be a monumental effort; but, I'm now thinking with some meta-programming techniques, it may not be that hard :D