In the last few days, I've taken a look at consuming the Zendesk web widget API in an Angular application. Aside from the apparent race condition, the thing that makes the Zendesk web widget interesting is that it exhibits a dual nature: before the API has fully-loaded, the zEmbed() Function acts as a queueing mechanism for callbacks. Then, once the API is fully-loaded, the zEmbed object presents as an API for interacting with the rendered widget. This dual-nature is a pattern that I've seen several times in 3rd-party JavaScript libraries; but, I wasn't sure how something like this would be modeled in TypeScript. After a little research, the solution appears to be a TypeScript feature known as "declaration merging."

In my previous Zendesk web widget experiments, I didn't have to write the zEmbed Function / Object, I just had to provide a Type declaration for it so that the TypeScript compiler wouldn't complain. This Type declaration looked like this:

Here, you can see that the zEmbed object is both invocable and consumable as an API.

To create a similar duality in TypeScript, we can use a feature known as "declaration merging". Declaration merging is the process by which two or more Type declarations are aggregated to represent a single Type. TypeScript supports several ways to merge declarations; but, for this particular exploration, we can merge a "Function" and a "Namespace". In this case, the Function would be our zEmbed() function and the Namespace would hold our API methods:

When the TypeScript compiler processes this file, it ends up injecting the zEmbed Namespace properties into the zEmbed Function. In fact, if we look at the compiled source code, we can see exactly how this happens:

As you can see, the zEmbed() function is being passed into an immediately-invoked Function expression (IIFE, pronounced "iffy"), that injects the properties of the "Namespace" into the Function object. One of the coolest features of JavaScript is that Functions can have properties.

To demonstrate that this actually works, I created a tiny Angular 2 component that just imports the zEmbed object and tries to consume it both as a Function and as an API provider:

When we run this code, we get the following page output: 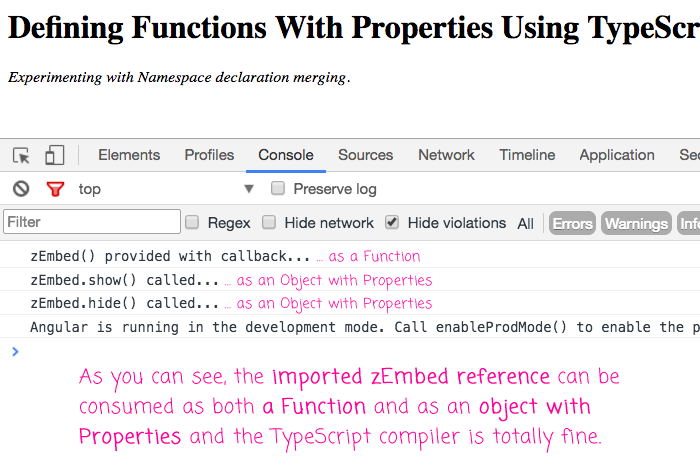 As you can see, the imported zEmbed reference was consumable both as an invocable Function and as an Object with Properties. The two different type declarations were successfully merged and with nary a TypeScript compiler error in sight.

One of the things that I like most about TypeScript is simply the fact that it forces me to really think about how values get defined and about what assumptions can be made by consuming code. And, it's great to see that TypeScript supports constructs like Declaration Merging that help model real-world JavaScript usage. In this case, it makes it easy to define Functions that also act as Objects.

Special thanks to the StackOverflow post that pointed me in the right direction.