A couple of days ago, I demonstrated how to get the in-browser TypeScript transpiler to enforce type-checking. In that demo, however, I could not get the type-checker to validate a variable assignment in one of my callbacks. While I was befuddled by this validation gap, Greg Lockwood was kind enough to jump in and point out that the lack of type-checking was due to my use of .bind(). Apparent, in TypeScript, bind is bad. As such, I wanted to look at ways to use callbacks while still maintaining proper type-safety.

The problem with .bind(), from what I can gather in this discusion, is that it returns a value of type "any". Because of this, the type-checker can make no guarantees about how a bound method should behave. As such, in order to enforce type-checking we have to avoid the .bind() method. But, we may still need valid "this" references within of our callbacks. Which means we have to get a little fancy with how we approach the problem.

Hoisting, no matter what anyone has told you, is one of the most magical features of JavaScript. It just makes life better and your code easier to organize (and often read). The fact that you can't hoist a fat-arrow function means that you either have to use them inline with another expression; or, you have to define them prior to their use; both of which provide sub-optimal levels of flexibility.

In the following demo, I am going to attempt to assign a string value to a numeric property. The first test will not enforce type-checking - that's our control test that uses the .bind() method. The four subsequent tests each use a different approach to make sure the type-checker catches the mismatched assignment:

NOTE: I am doing this in the context of an Angular 2 RC1 app, hence the AppComponent; but, there's no reason that this applies exclusively to Angular 2. It just so happens that this is how I am setup to run TypeScript in the browser. 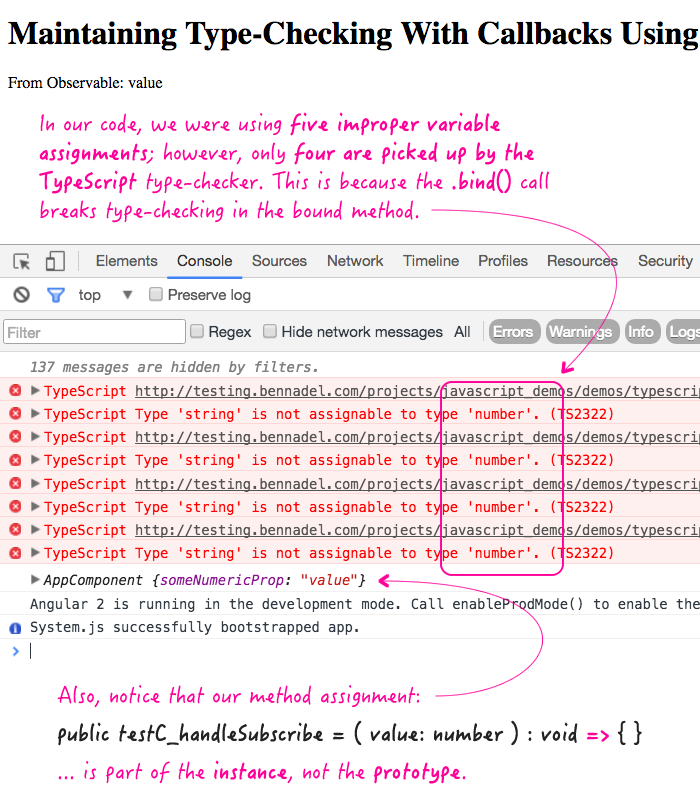 As you can see, all but the control test picked up the type mismatch in the property assignment. The "right" approach is just a matter of personal preference. The only one that is substantially different from the others is Test C in that it doesn't have to create a new closure for every method call. However, because of that, it can only reference component properties - it can't reference local variables declared within the calling context. So, while it is perhaps more memory efficient, it is certainly less flexible.

On the one hand, I love that type-checking adds a good degree of "self documentation" to the code. But, getting type-checking to work can require more hoop jumping than I am used to. Of course, TypeScript is still very new to me, so there is bound to be an adjustment period.