In my post yesterday about calculating module-relative file paths with require.resolve() in Node.js, I drew a distinction between "module paths" and "file paths". In Node, modules are loaded using a well documented algorithm that accounts for both relative and non-relative paths. Outside of the module loader, however, "file paths" are either absolute to the file system or relative to the "working directory" of the current process. By default, the working directory is the directory from which the node process was launched; but, this can be changed programmatically from within the node execution.

If you look in the path module documentation for Node, it outlines the fact that "." will resolve to the current working directory:

From that, we can gather that any non-absolute file path will also be relative to the working directory:

Based on this, we can then assume that any file operation that accepts a file path - such as fs.readFileSync(path) - will operate on the given path based on the path resolution policy. This means that fs (file system) operations should see files as either "absolute" or, relative to the working directory.

The app module will consume these data files using a relative file path:

Based on where we launch the node process, this working-directory-relative path should load a different data file. And, to make things even more interesting, I will be using the process.chdir() method to programmatically change the working directory mid-execution:

Now, let's run this node.js app from the root directory of the demo, invoking app.js from a sub-directory file path: 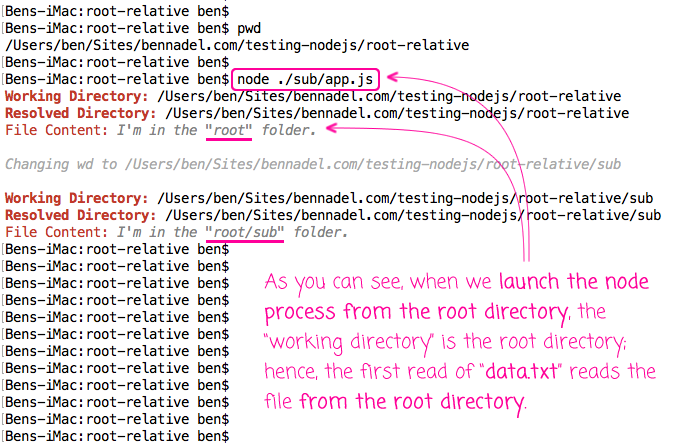 ... re-running the logging and the file-read shows us that the second file-read of "data.txt" reads from the sub-directory despite no pathing changes in the file read operation. 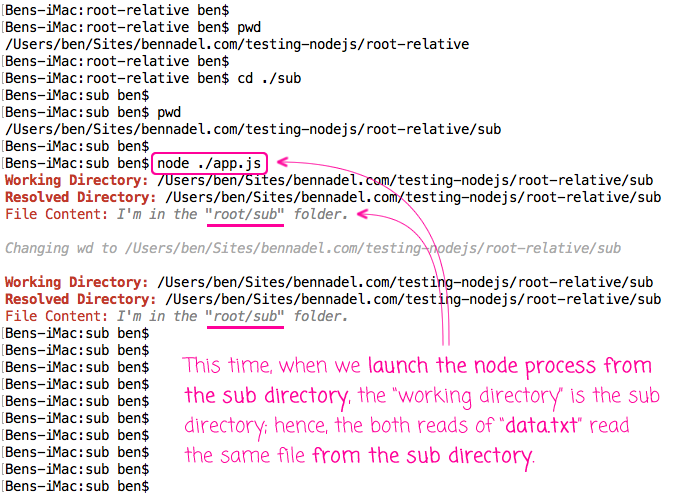 These assumption aren't necessarily a bad thing. And, I can certainly see a use-case in which the app module always changes the working directory to be the current module directory. This way, the file path operations within the app can always be "app relative", regardless of how we are launching node. We often rely on application-wide mappings to help resolve file-paths - so, I don't really see this as being any different.

And, of course, if you don't want to rely on the location of the working directory, you can always construct absolute file paths using your module's __dirname.

I know for me, the use of file paths - particularly relative file paths - is always a bit magical until you understand the rules that govern the consumption. For me, seeing how the location of the node process affects the file reads really made things a lot more concrete. And, knowing that I can programmatically change the working directory gives me some ideas about how I want to approach my current Express.js studies.

Tweet This Fascinating post by @BenNadel - Non-Module File Paths Are Relative To The "Working Directory" In Node.js https://www.bennadel.com/go/3244

You sir, are my nodeJS hero! Thanks for writing this out so clearly and concisely!

My pleasure, good sir -- I'm glad you found this interesting.

Awesome! Glad to be able to help :D

Thank you soooo much. Was refactoring and got super puzzled when my require paths worked as expected but not my FilePaths.

Having someone else explore this and write it all out nicely is very handy.

My pleasure, good sir! That's why the JavaScript community is so awesome. Teamwork all the way down :D