When I started learning Angular 2, I did so in the context of ES5. But, after much community push-back and some clear evidence that some of the code would be more readable with TypeScript, I switched over to this type-driven super-set of JavaScript. And, I actually enjoy it. But, I do find that I spend a decent amount of time "just" getting "working JavaScript" to validate properly in TypeScript. Just the other day, in fact, I was completely stumped by object-access validation. Thankfully, Brandon Roberts was online and available to save the day!

Most of the time, in TypeScript, objects have narrowly defined interfaces. Meaning, the properties and methods available on the objects are known at transpile time. But, some objects cannot conform to such constraints - some objects are dynamic and driven by things like Router state. As such, it's not unusual to see an object with a loosely defined, key-driven interface:

Here, we're basically saying that this object is a collection of string-based keys that will reference values of any type. This is a plain-old JavaScript object; or a hash; or whatever you want to call it.

When dealing with these kinds of objects in vanilla JavaScript, we can usually use either one of two notations:

For all intents and purposes, these two notations are functionality equivalent (although you sometimes have to use the bracket-notation). In TypeScript, however, these two variants are not the same. And, in fact, given the perviously defined interface, only one of them will validate.

To see this in action, I've created a simple Angular 2 component that populates a data structure and then tries to access the values contained within that data structure using both types of notation:

Notice that the first console.log() statement uses the bracket-notation and the second uses the dot-notation. And, when we run this code, we get the following console-output: 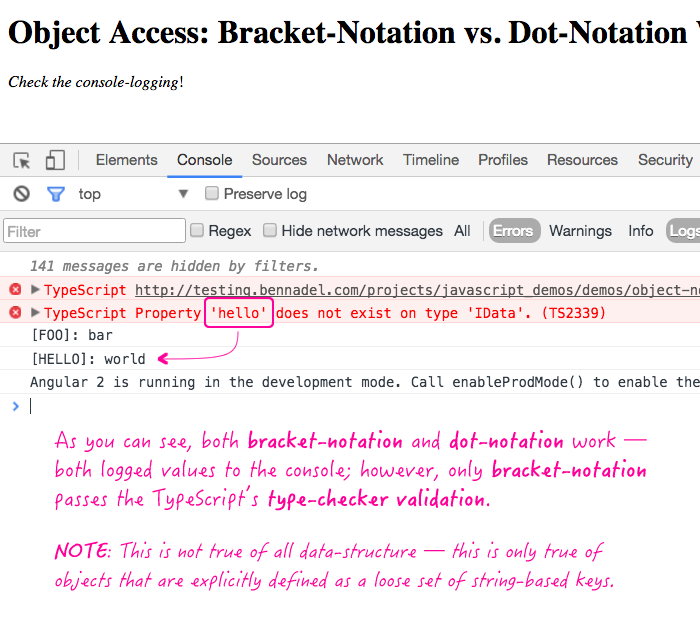 As you can see, both console.log() statements work - the code is functional and logs to the console; but, the latter call, using dot-notation, causes a TypeScript validation error. Presumably because the key is not explicitly defined as a string; though, of course, we all know that this is how JavaScript works.

NOTE: This divergence is not generically true in TypeScript. Meaning, most of the time, you can use either type of access notation. This is only true for objects that are loosely defined as a set of string-based keys.

I really do like TypeScript; but, in my studies, TypeScript is not a first-class citizen - I'm learning Angular 2 and, as a byproduct, I'm learning enough TypeScript to get the job done. Unfortunately, this means that I sometimes spend an inordinate amount of type just trying to satisfy the type-checker. In this case, Brandon Roberts was able to show me that bracket-notation and dot-notation, while functionally equivalent in JavaScript, are not the same thing in TypeScript.

Define the data as follow and be happy:
private data : IData | Object;

Or, if you are going to use it in alot of places, define IData as follow:

Ah, interesting. I'm still getting my head wrapped around TypeScript and how to use annotations. This might work when I'm in control of the type declarations. But, in Angular 2, if I'm consuming something that's part of the core, unfortunately, I'm not sure I can get around this.

For example, in the Angular 2 router, I can access the params associated with a route segment like this:

... this "params" object, if you look in the bowels of the source code, is defined as:

... so, in this case, I don't think there's anyway around it. I have to use the bracket-notation when accessing the "params" or I'll get TypeScript yelling at me.

This is a weird gotcha that I could see myself getting stuck on as well. Thanks for posting it!

Typing Script is not so easy for all. But you you help me a lot.