The other day, I tweeted about how much I love the INSERT IGNORE INTO syntax in MySQL. In response to that tweet, Ken Auenson asked me what kind of a use-case I had for ignoring duplicate records. Typically, I use IGNORE when migrating and / or transforming data. And, since I don't think I've ever really blogged about that before, I thought I might take a quick look at one use-case that has been very helpful to me: performing online ALTER TABLE statements without any downtime. 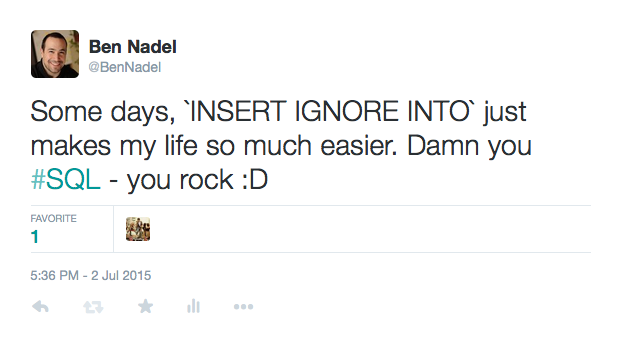 The IGNORE portion of the INSERT statement just says that if the INSERT causes a primary key violation, ignore the error (without inserting the record) and move on with the SQL statement. This is really handy in a migration or a transformation process where you might have to run the same script over and over again and don't want to worry about existing records.

When it comes to [how I execute] online ALTER TABLE statements without any downtime, the IGNORE comes into play because I set up TRIGGERs that automatically replicate rows across two tables. Then, in conjunction with said triggers, I start explicitly copying rows from one table to another. Due to the nature of the triggers and the timing and the possibility of failure in the script itself, there's a chance that I'll try to explicitly copy a record that has already been replicated. As such, I just tell MySQL to ignore the primary key violation and continue on with the migration.

Side Note: Outside of transformation and migration scripts, I don't really have a use-case for the IGNORE syntax. In the workflows of my applications, I typically want SQL to throw an error upon violations because it means that something else is going wrong in my business logic.

When performing the online migration, I have a four-step workflow:

NOTE: There are some tools that will do this for you from the command-line, like pt-online-schema-change from Percona. However, many of those require MySQL to be running on a *nix platform and I started doing this when I was still running everything on Windows.

When the production table is very large, we cannot simply run an ALTER TABLE statement on it directly. It will lock up the table and, depending on what table it is, may bring your application to a grinding halt. As such, we have to build the desired table structure in parallel with the live table. Then, when two tables are in sync, swap them. The first step is setting up the new structure and configuring triggers to automatically pull new data into the shadow table.

Once we have our shadow table setup and we have triggers moving over new modifications, we have to take care of migrating existing records. This is where the INSERT IGNORE INTO comes into play. When migrating existing records from the live table to the shadow table, I don't want to worry about primary key violations. This allows me to stop the script, tweak it, and restart it without having to reset the state of the system.

I'm running my migrations in ColdFusion, but there is nothing ColdFusion specific about this concept.

Technically, this isn't necessary. If the script is good and the migration is true and the developer is brave, then nothing should have gone wrong. But, migrating tables is perhaps the most terrifying aspect of database administration. So, in order to not vomit on myself, I like to run a few sanity checks. The following sanity checks just help me believe that the shadow table accurately represents the live table plus the altered structure.

Step 4: Swap The Live Table And The Shadow Table.

Once I am convinced that the shadow table is ready to go, it's time to swap the two tables and drop the triggers.

At this point, your live table now has the migrated table structure, all with no downtime.

I am not a database administrator, so take this with a grain of salt; I learn about databases as I go, when needed. Mostly, I just wanted to show a solid use-case for the INSERT IGNORE INTO syntax. While not very useful [for me personally] in general application development, INSERT IGNORE INTO has been absolutely priceless when it comes to data transformation scripts.

Ben,
I am always blown away with you attention to detail, and your willingness to spend the time and energy to make posts like this.
You rock!
I have never had to do a live update like this, very neat approach. Thanks again.

Thanks my man. Doing updates like this NOT fun :) I have a mini panic-attack right before I have to swap out the tables. It's never actually caused a problem... but, it's utterly terrifying every time :(

You should be able to do the equivalent in Oracle and SQL Server using the MERGE syntax.

This isn't a completely foolproof online solution though. You do that the small moments in time when your swapping the tables to contend with. Also, don't forget about any key relationships that need moved.

I've also been told that the most recent version of MySQL - 5.7 - apparently supports online ALTER TABLE operations, though I have not tried this personally. Looking at the docs, it looks like you can specify the algorithm that it is supposed to use:

>> Specifying ALGORITHM=INPLACE makes the operation use the
>> in-place technique for clauses and storage engines that support it,
>> and fail with an error otherwise, thus avoiding a lengthy table copy
>> if you try altering a table that uses a different storage engine than
>> you expect.

So, that sounds pretty cool!