The other day, I started digging into route resolution in AngularJS. In that post, I demonstrated that you could delay the $routeChangeSuccess event by creating one or more promises during the route transition. In that post, I was using a resolution factory function; but, I could have also used a Service. That said, the two approaches result in two very different behaviors.

When defining routes in AngularJS, each route configuration can contain a "resolve" object. This resolve object contains a collection of key-value pairs that have to be resolved before the $routeChangeSuccess event will be triggered. Each key defines the name of the resolved value as it will appear in the $route.current.locals object. Each value tells AngularJS how to execute the resolution.

Under the hood, the factory function is invoked using $injector.invoke(). This means that it can make use of dependency injection. The service (string value), on the other hand, is accessed using $injector.get() - the same way that any service is accessed in AngularJS. This difference is important.

When you require a service in AngularJS, the injector looks for the service in the internal cache. If it exists, it returns it from the cache. If it doesn't exist, it instantiates it, sticks it in the cache, and then returns it. The key take-away here is that a service is only ever instantiated once, on-demand, the first time that it is accessed. All other requests for said service are pulled directly from the cache.

In terms of route resolution, this makes a huge difference. If you use a factory function to resolve a route value, the factory function is invoked every time the route is accessed; there is no internal caching involved in this workflow. If, on the other hand, you use a service as the route value, the service is only ever instantiated once. This means that your route value is only ever calculated once - not every time your route is accessed.

When you use an AngularJS service as a route resolution, it helps to think about this as a special use-case for services. Usually, services provide an API to access data asynchronously; but, when used for the resolution of a route, the service, itself, is the asynchronous data.

I didn't articulate that difference very well. In a practical sense, a typical service provides an API that subsequently returns a promise. But, for route resolution, the service, itself, is the promise.

NOTE: A route resolution service can return static data synchronously. But, if you're going to do that, you might as well just calculate that data, on demand, and inject it into any Controller that needs it - no need to deal with route resolution at all.

If I run the above page and toggle back and forth between route A and route B, I get the following console output: 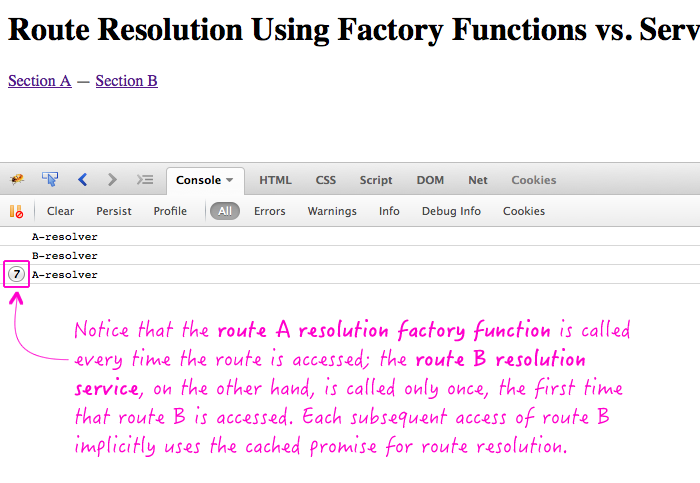 Notice that only the route A resolution is logged more than once. This is because the resolution factory function is called every time the route is accessed. The resolution service, on the other hand, is only instantiated once; then, the same cached promise is used over and over again to resolve the route whenever it is accessed.