After my recent posts on AngularJS routing and the back-button and how route params are passed-around in redirectTo actions, I wanted to take a look at route resolution. This is a feature that I've never actually used before; but, in AngularJS, you can defer the triggering of the $routeChangeSuccess event until certain values have been resolved. These can be static values; or, they can be wrapped up in promises that get resolved (or rejected) eventually.

When it comes to routing, there are a number of moving parts. When you throw eventual resolution into the mix, it can become unclear as to which parts of the routing ecosystem are affected. The key to understanding this is to understand where route-resolution falls within the route-change workflow.

Looking at the source code, here's the general workflow for routing:

When you look at this workflow, there are a few important take-aways. First, the $route service is updated before any of the resolve-factories are invoked. And second, if the route-change fails (ie, by one rejected promise), nothing gets reverted. In fact, the only difference between a route resolution and a route rejection is which event gets triggered - success vs. error - and whether or not the $routeParams service is updated.

Beyond the general routing workflow, the other point of confusion that I had going into this is how often route resolution has to take place. Before I started reading about it, I had assumed that a route would only ever need to be resolved once - kind of like a service in the dependency-injection container. But, there's nothing in the routing workflow to suggest this. And, if you try my demo, you will see that one of the routes has to be resolved (using a $timeout) every time that the route is accessed.

Of course, you can implement logic that explicitly maintains a resolve-promise across route-changes. This would, for all intents and purposes, mean that the route only has to be resolved once. But, that is fodder for another blog post.

When the resolve-promises have all been resolved, they are stored in the "locals" object of the current route. This makes them available to any controller or service that has the $route service injected. However, if you are using ngView (which I am not), these locals are also used to augment the dependency-injection values during Controller instantiation.

If I run this page and click across the three routes, I get the following console output: 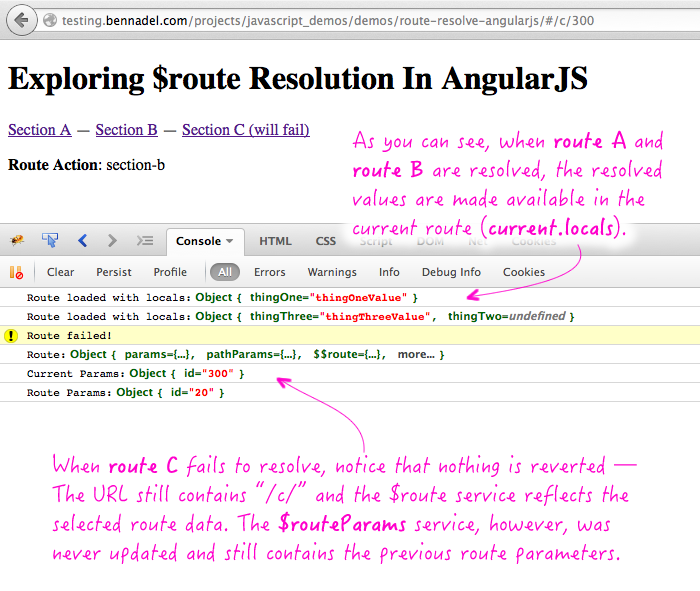 As you can see, the resolved values from route A and route B are made available in both the current route - $route.current.locals - as well as in the $routeParams service. When route C fails to resolve, however, nothing is reverted. The URL still contains the "c" route. And, when we inspect the current route - $route.current.params - we see that they contain the params extracted from route C's location.

This post was intended to explore the mechanics of route-resolution. At this time, I don't really have a good use-case for it; but, now that I understand a bit more about how it works, I can start to noodle on what you would use it for. Personally, I suspect that route resolution will be a lot more exciting in AngularJS 2.0 when we can [easily] lazily-load sub-modules of an application.

I wanted to follow this up with a comparison of route resolution factory functions vs. services:

While both provide values (or the promise of values), they do so in a very different way.