After looking at how to unbind scope-event handlers in AngularJS yesterday, I got curious as to how events interact with isolate scopes. I'm still relatively new to isolate scopes, so my mental model isn't super strong. I know they don't "prototypically" inherit data from their parent; but, they're still part of the Scope hierarchy. So, what does this mean for the Scope-based event system?

To explore this scenario, I set up an AppController, an Isolate Scope directive, and an InnerController that - from an HTML standpoint - are all nested. However, from a Scope standpoint, we know that this is not quite so simple. When the application is bootstrapped, I start broadcasting events from the AppController. The Isolate scope then listens for this event and also attempts to watch for changes in the related scope property.

As you can see, the isolate scope was able to listen for events being broadcast down through the scope hierarchy; however, it was not able to see the related scope value, "pingCount" in its parent scope. 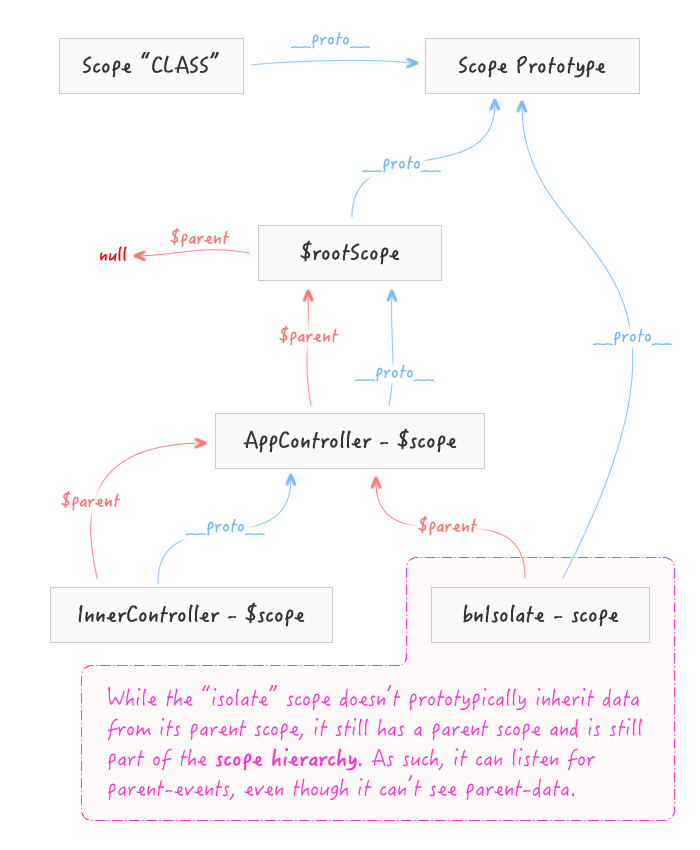 Isolate scopes force you to create more thoroughly-decoupled components, which is why I'm trying to dig into them a bit more. But, I'm still fairly new to the concept, so I'm trying to flesh out my mental model. On the one hand, its nice that they can handle broadcast events; but, on the other hand, I wonder if that breaks the concept of the isolate scope?

Tweet This Titillating read by @BenNadel - How Scope.$broadcast() Interacts With Isolate Scopes In AngularJS https://www.bennadel.com/go/2725

This is very interesting. I'm trying to understand how this fits with what said in this great post:

How isolated scope values are reflected to parent controller (and then to trunscluded html's scope)?

I believe that my exploration here lines up nicely with what is being demonstrated in the article you linked. The part that makes that article very "sneaky" is the two-way binding in in the isolate scope. Since isolate scopes don't inherit data from the parent scope, you have to rely on explicitly providing scope data using attribute elements:

In this case, the isolate scope would read from scope.readOnlyValue... but, when it wants to MUTATE the value, it should use scope.valueMutator().

But, again, I'm still learning this stuff, so maybe not the best-practice approach.

Thanks, this was really helpful!

In my previous comment, I mixed up "@" and "&" - I meant to use "&" in "&otherAttribute" to pass-through a mutator method. I believe the "@" is for read-only attribute access.