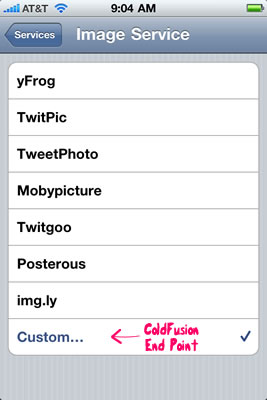 This setting is nothing more than a single web service URL that supports a common API. According to the documentation on the AteBits development site, the web service API to model is the TwitPic image upload API. From what I can tell, though, the API supported by Tweetie is a subset of the image upload functionality provided by TwitPic.

Since Tweetie was bought by Twitter, the documentation on AteBits has become outdated. Tweetie no longer posts the Twitter username and password of the individual uploading the given photo. After a good deal of Googling, I finally figured out that Tweetie is now taking an "oAuth Echo" approach to user validation. In this approach, the client application - Tweetie - secures oAuth credentials for the user. It then posts the image along with both the oAuth credentials and a user validation web service URL to the 3rd party application - our image uploader. Our image uploader then uses both the oAuth credentials and the user validation web service URL to validate the user. Once the user is validated, we can then store the uploaded image and return our XML web service response to the client application (Tweetie). 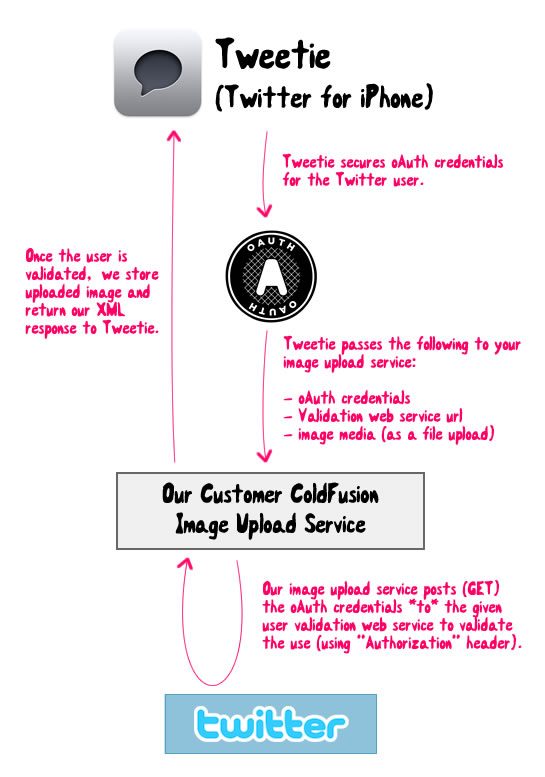 Once the 3rd party application has secured the oAuth credentials, it posts the following HTTP headers along with the image upload:

The "X-Auth-Service-Provider" header provides a URL to the user validation service that our image uploader is supposed to use to validate the user (posting the image). In this case, is posts the following Twitter API url:

The "X-Verify-Credentials-Authorization" header provides the oAuth credentials that we are supposed to post the above validation web service. This value will look something like this:

This oAuth value needs to be posted as the "Authorization" header to the validation web service. The validation web service will either respond with a 401 Unauthorized response, or it will respond with a 200 OK response. If it returns with a 200 OK response, then the content of the HTTP response will be a JSON representation of the authorized Twitter user. It is from this JSON structure that we can get the username of the Twitter user that is uploading the given image.

Understanding the oAuth Echo work flow was the biggest hurdle in creating a custom ColdFusion image upload service for Tweetie. Once I figure it out, however, the rest was little more a standard file upload. According to the TwitPic API, you are supposed to return different error codes based on what aspect of the image upload algorithm failed (authorization, file size, etc.); but, for this demo, I am keeping it very simple - it either works or it doesn't. I'm not bothering to break down the exception reasons, although, you'll see in the following code that I am raising different exceptions which can be caught and handled individually if you like.

That said, here is the ColdFusion code that handles the image upload from Tweetie. It is this file that is defined as the end point in the custom upload service setting.

Because there are so many dependent steps in this work flow that might break, I am using a CFTry / CFCatch / CFThrow approach (as outlined in my ColdFusion API Presentation). In using this approach, not only can I easily respond to individual exceptions using typed-CFCatch tags, I can also be sure that at every step along the way, all of the previous steps were valid.

To keep this demo as simple as possible, I am returning the physical resource URL of the uploaded image. In reality, you'd probably want to take the uploaded URL, insert it into a database, and create some sort "view" page for said image. Then, you'd probably want to return a short-url to said view page in lieu of returning the actual image URL. But, at that point, we would need to get much more specific in our implementation. This code is meant to be a general approach to handling custom image uploads from Tweetie.

Thanks I was looking for something like tweetie, for a project I'm considering for http://redtideflorida.org/page/ where people could upload photos and tweet to help track the oil damage on beaches (and red tide when it comes back) in Florida.

But hey, maybe a little fairy will come, wave her wand and make this service not necessary!

BTW, your code above is freakin beautiful.

Thanks my man. Good luck with your app - sounds like a very environmentally cool service.