In the process of replacing jQuery with Umbrella JS as my DOM (Document Object Model) abstraction layer, I ran into a small quirky behavior. It seems that if I created a <script> element using the Umbrella JS constructor, the JavaScript code within the script tag would be inert if the tag was created as an HTML snippet. However, if I created the tag using document.createElement(), then the JavaScript content would be executed when added to the DOM.

To this in action, let's generate two <script> tags, one using either approach, append them to the body tag and see what we get in the console. Here's the JavaScript code:

As you can see, we're using the following two Umbrella JS constructor invocations to build up script tags:

... then we're setting the textContent values and appending them to the DOM. And, when we execute this code, we get the following browser output: 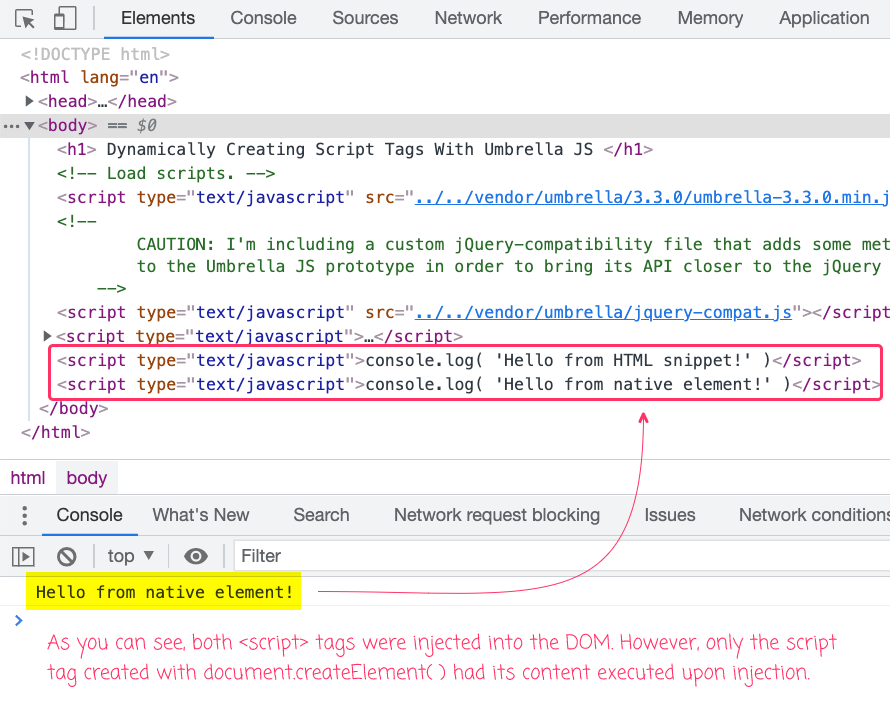 As you can see, both <script> tags were created and injected into the DOM. However, the one created as an HTML snippet appears to be inert. Only the one created using document.createElement() had its JavaScript code executed.

To be clear, this has nothing to do with the fact that I'm setting the textContent property (via .text()) - the same inert behavior would be observed if I were setting the src attribute in order to load a remote JavaScript file. If created using an HTML snippet, no remote script file will be loaded.

A few years ago, I ran into a similar problem with jQuery as well. In that post, jQuery wouldn't execute Script tags created with a <script> HTML snippet. So, my guess is that this is not a jQuery / Umbrella JS issue but rather a low-level DOM issue.