Two months ago, I read Shape Up: Stop Running in Circles and Ship Work That Matters by Ryan Singer. This is the latest book from Basecamp; and, like their other books, it's filled with wonderfully thought-provoking concepts and perspectives. One idea that I really loved was the concept of "Breadboadring". A breadboard is an extremely low-fidelity outline of an application workflow that allows an individual to identify the key features and information architecture of a user interface (UI) without getting distracted by complexity and nuance of the user experience (UX). This gesture feels like a potential value-add for InVision; so, I wanted to put together a proof-of-concept in Angular 9.0.0-next.0 that I could pitch to my Product Team.

Run this demo in my Breadboarding POC app on Netlify.

View this code in my Breadboarding POC project on GitHub.

I am fanatical about prototyping. I believe prototyping is key to successful product design. But, over my career, I've come to understand that prototyping isn't one thing. There are many ways to "prototype"; and, often times, the act of prototyping is more important than the prototype itself (see Prototypes Are Worthless, But Prototyping Is Essential). To me, Breadboarding is just another facet of prototyping - an optional phase in the iterative ideation process that we can apply to the life-cycle of Product design.

Every approach to Prototyping comes with a set of trade-offs. The most obvious one is generally the speed of prototyping vs. the fidelity of the design: the higher the fidelity, the longer the prototype takes to create. But, higher fidelity brings with it several other more subtle complexities:

And, what's more, anyone can create a Breadboard. You don't have to understand a design tool like InVision Studio; you don't have to be good at sketching with pen-and-paper; you don't even have to be a designer. Breadboarding is so easy that anyone in your organization that has an idea can throw together a breadboard that plainly and simply brings an idea to life.

To get a sense of how easy this can be, here's an example of a Breadboard for a Login page: 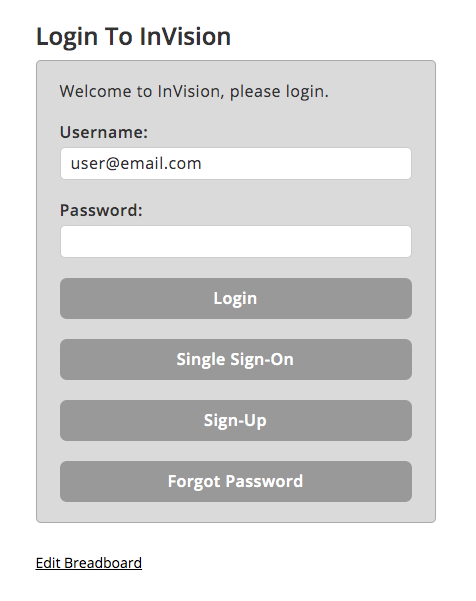 As you can see, there's no wiggle-room on design here. The information architecture of the user experience (UX) is front-and-center. No rabbit-holing on button colors; no going on wild-tangents about font choices and letter-spacing; the only thing we can think about during this phase of ideation is the solving of business problems.

And, this Breadboard took seconds to put together. Which means, throwing it out carries zero emotional weight. This allows for quick and extremely low-cost experimentation which, hopefully, leads to a greater variety of ideas and perspectives.

For my Proof of Concept, I wanted to get the Angular application to a point where I could showcase the concept; but, like any other prototype, I didn't want to put so much work into it that I cared about throwing it away. As such, the iteration (at the time of this writing), does just enough to allow a user to create a single Breadboarding workflow that will persist the - via the LocalStorage API - across page refreshes.

Right now, your Breadboarding data cannot be shared with anyone else, because it lives in your browser's local cache. But, ultimately, a Breadboard would be shareable, just like any other InVision prototype. If I have time, perhaps I can try to plug Firebase into this proof-of-concept such that I could create a "share experience" on Netlify.

In some ways, the historical popularity of Microsoft Powerpoint proves the value-add of Breadboarding. After all, a Powerpoint presentation holds many of the same value propositions as a Breadboard workflow: it's easy to use; it's accessible to a wide variety of individuals in an organization; and, it's focused primarily on information architecture over user experience (UX). So, maybe I am completely delusional; but, drawing this kind of parallel is why I am excited about pitching this idea to my team.

Tweet This Great article by @BenNadel - Proof-Of-Concept: InVision Breadboarding In Angular 9.0.0-next.9 https://www.bennadel.com/go/3702