I'm very new to SVG (Scalable Vector Graphics). I've read Practical SVG by Chris Coyier. And, I've tried to create an SVG icon system using components in Angular 7.2.0. But, really, I know very little about how SVG works or about how to make it dynamic. Up until now, everything that I've done with SVG has been static. And, one thing that I've been curious about recently is how to scale SVG graphics dynamically. Specifically, how - or even if - I can implement 9-Slice scaling with SVG graphics in Angular. From what I've been able to find on Google, there is no native way to do 9-Slice scaling with SVG. So, I tried to implement it using Math in Angular 7.2.4.

The idea behind 9-Slice scaling is that you take an object and you split it up into 9-slices in which each slice defines how the given object should scale when it is resized. So, for example, if we had a rectangle with rounded corners, we'd want to slice it up so that the corners remain at a fixed size while the width and the height of the rectangle can be stretched: 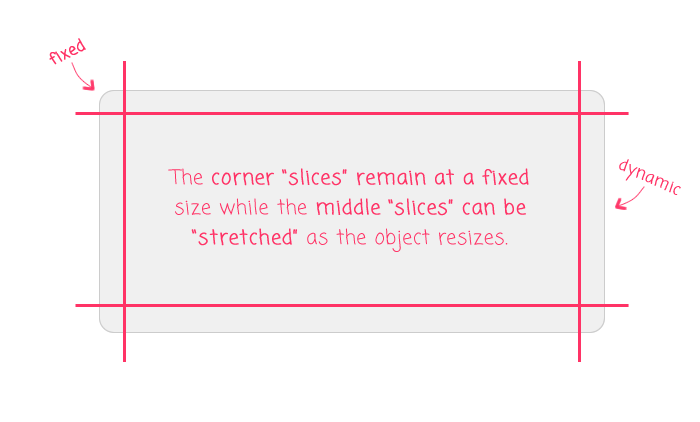 Slicing the rectangle up in this manner allows the "detail rich" parts (ie, the rounded corners) to remain fixed while allowing the "detail poor" parts to be stretched and distorted. Of course, since the stretchy parts don't really have any detail, the distortion caused by the stretching doesn't result in any funky artifacts.

Now, again, I'm super new to SVG; but, from what I've been reading, this kind of scaling doesn't appear to be part of the SVG semantics. You can use the "preserveAspectRatio" attribute to influence the way an SVG element scales inside of its viewBox. And, Sara Soueidan has a fascinating article on dynamic SVG layouts using nested SVG elements. But, ultimately, SVG coordinates appear to be "absolute".

Eventually, I came across the post, Dynamic SVG Components by Dave Geddes. In his post, Geddes creates an SVG component that, more or less, uses the concept of 9-slice scaling to create a custom container. His post was awesome - and is very much the inspiration for my post; but, his post also showed me that there was no easy answer - that the scaling has to be done using good old-fashion Math.

So, to try and bring Geddes' approach into my own mental model, I wanted to see if I could create a Pop-Up component in Angular 7.2.4 that would scale dynamically based on its projected content. And, to make the experiment even more exciting, the pop-up container has a little bottom carrot. So, not only do I have to keep the corners of the pop-up "fixed", I also have to keep the carrot's size and position fixed to the center of the bottom length.

First, let's look at how this component will be consumed. In my root component, I am using several instances of the "pop-up" component, each with a different amount of content:

My strategy here is to render the SVG Element using absolute position inside of the pop-up component:

As you can see, the SVG element will stretch to cover the pop-up host. On its own, this layout would do nothing but stretch and distort the embedded SVG paths. So, in order to ensure proper scaling, I'm going to measure the dimensions of the host element and then use those dimensions to set the SVG viewBox and the coordinates of the embedded SVG path.

This part doesn't include any magic. I designed my pop-up in InVision Studio and I exported its SVG. Then, I went about converting the absolute path coordinates into dynamic math-based coordinates. This was a grueling process and took me over 3-hours. Especially since I had a lot of trouble converting the rounded-corner "curves" to use "relative" coordinates (c), not absolute coordinates (C).

Ultimately, here's the Angular component that I ended up with:

As you can see, this is just a lot of math. I get the dimensions of the host element and then I use those dimensions to manually implement the 9-slice scaling. It was a pain in the butt. That said, if we render this demo, we can see that it actually kind of works: 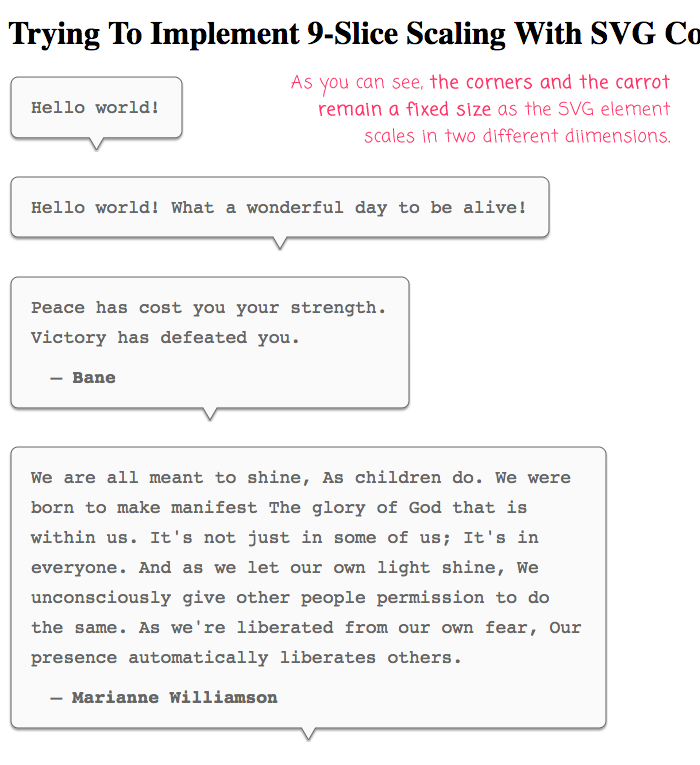 This appears to do what I want it to do. But, keep in mind that this is just an experiment. I am not sure if this is an approach that you'd want to take, especially since I have to define the SVG based on the rendered dimensions of the host element. This, in and of itself, poses a number of problems. Consider the fact that I am using the ElementRef.nativeElement to define the SVG attributes. I am doing this - instead of using a declarative template-based approach - because I can't have cascading view-updates without adding some sort of janky timeout (at least not as far as I know).

It would be awesome if 9-Slice scaling was somehow part of the SVG paradigm. But, it's cool to know that I can manually fill-in the feature-gap if absolutely necessary. If nothing else, this experiment reminds me that SVG is really an underutilized resource in my own Angular applications.