Last week, I took a look at tracking the scroll percentage (0-100) of the Document (or any arbitrary Element) using RxJS. In that post, all of the Observable events triggered by the "scroll" interaction were meaningful to the subscriber. And, as such, it made sense that every scroll interaction should trigger a change-detection digest in Angular. But, this got me thinking about RxJS and the change-detection life-cycle. As it turns out, RxJS is not entirely compatible with Zone.js, which is what Angular uses to manage its change-detection algorithm. This means that in order to bind RxJS Observables outside of the Angular zone, we need to apply an RxJS-specific patch to our Angular application.

To be honest, my understanding of Zone.js is not terribly robust. I knew that it was based on monkey-patching the JavaScript runtime, where it overrode methods like setTimeout() and setInterval(). But, beyond that, I've just enjoyed the "magic" without asking too many questions.

Unfortunately, this understanding of Zone.js is a bit too simplistic as it clearly falls-short when dealing with some 3rd-party APIs, like RxJS. For example, if you try to setup an Observable using NgZone.runOutsideAngular(), Angular digests will be triggered as events are raised, regardless of whether or not you ever re-enter the Angular zone.

To deal with this incompatibility, the Zone.js repository contains "patch" files that you can import into your Angular application. These patch files will monkey-patch the associated 3rd-party API, allowing it to become Zone-aware. For RxJS, they provide the "zone.js/dist/zone-patch-rxjs" file.

CAUTION: At the time of this writing - as best I can tell - this RxJS patch file is not compatible with the latest version of RxJS. As such, you have to include the "rxjs-compat" module, which will make RxJS v6 compatible with 5.x module paths. From what I've read, this causes the entire RxJS library to get compiled into the app. As such, this patch should not be used haphazardly.

Once this patch is imported into your Angular application, you can - if need-be - setup an Observable outside of the Angular Zone while still allowing the subscriber callbacks to be invoked inside of the Angular Zone. To demonstrate this, I've created a simple Angular application that tracks mouse events using an RxJS stream. However, rather than listening to every single mouse-movement, the RxJS stream throttles the events to every 2,000-ms.

Notice that I am importing the "zone.js/dist/zone-patch-rxjs" file at the top of my App component. In a non-demo situation, you'd probably want to import this file in a more global place, like your Application module file or your polyfill file. But, for the sake of simplicity, I'm keeping everything in one file.

Once the patch is applied, I can use the fromEvent() operator to listen for mouse movements outside of the Angular Zone. This will allow those events to be tracked without triggering change-detection digests, which we can verify with the ngDoCheck() life-cycle method.

Now, if we run this Angular application in the browser and move the mouse around, we get the following output: 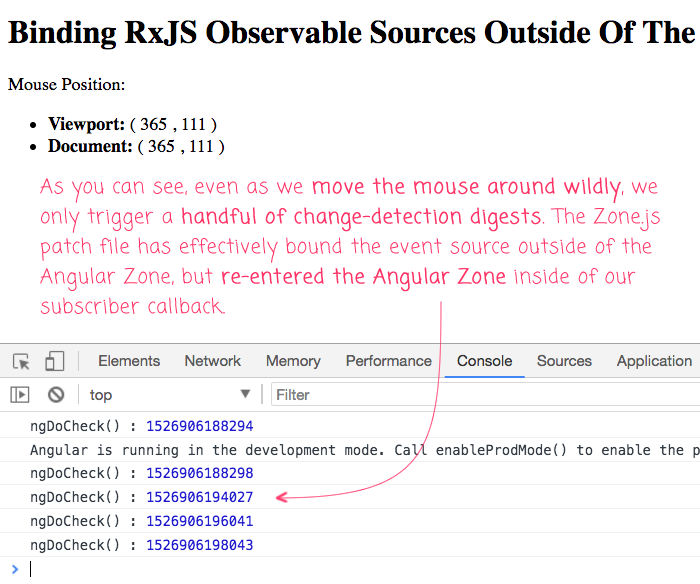 As you can see, even as we move the mouse around wildly, causing many "mousemove" events to be emitted, our throttleTime() only lets a few of the events through to the subscriber. As such, only a handful of change-detection digests are triggered.

In contracts, here's what happens when we run the application without the Zone.js patch file: 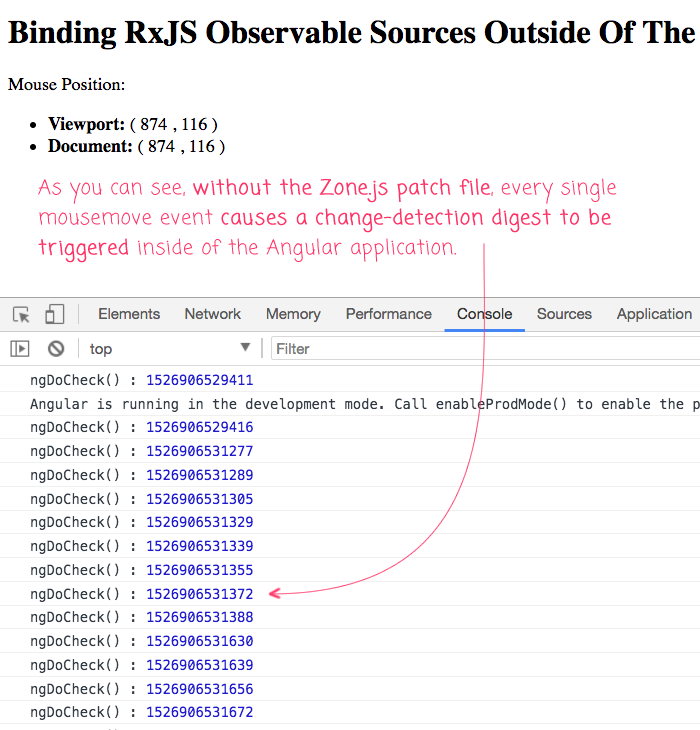 To be clear, I am not recommending that everyone start including the Zone.js patch file for RxJS in your Angular application. Not only does it appear to bloat the size of the Angular app (due to the full inclusion of the RxJS library); but, it seems unlikely that you run into too many situations in which you actually want to ignore events propagated down through an RxJS stream. That said, this is the first time I've every seen this patch file, so please take what I say here with a grain of salt.

The Zone usage in Angular is "magical". It "just works". Except that it doesn't always "just work" the way you might expect it to. The Zone.js library provides some additional patch files to fill in the gaps when dealing with 3rd-party libraries like RxJS. And, while I am not saying that these patch files are necessary, it certainly does make me want to become more cognizant of where the seams in my application are. And, about how Angular's change-detection manages events that cross those boundaries.

Tweet This Great article by @BenNadel - Binding RxJS Observable Sources Outside Of The NgZone In Angular 6.0.2 https://www.bennadel.com/go/3448

Also, here's an interesting discussion around an older ticket to add Zone-awareness directly to RxJS (which was rejected):

Thank you very much Ben. It helps me a lot.

this is more accurate than ngDoCheck

Oh, that's an interesting idea. To be clear - and make sure I understand what you mean - you're saying that because the cdrRun() method is being executed as part of the View template, it is, by definition, called every time change-detection is run for that View. That's very clever. I'll have to let that marinate in the back of my head.

To be clear - and make sure I understand what you mean - you're saying that because the cdrRun() method is being executed as part of the View template, it is, by definition, called every time change-detection is run for that View.

yeah! thats exactly what I meant. I also noticed that ngDoCheck and ngOnChanges is always called, even if component is detached using changeDetectorRef.detach().