UPDATE: In the following post, I state that the final signature doesn't need any typing. However, as Prashant Tiwari pointed out, that was because my tsconfig allowed for implicit "any". Once you disable that, the TypeScript compiler throws an error (and requires some degree of typing on the base method signature).

The other day, I added DogStatsD support to my ColdFusion StatsD library. As part of that implementation, I allowed for a flexible set of method invocation signatures. Unfortunately, in a dynamic language like ColdFusion, method overloading is anything but explicit and the code ends up being a bit messy. The same is true for JavaScript. However, with TypeScript, we can add the clarity of function-overload signatures on top of the aggressively dynamic nature of JavaScript. That said, it took me a little while to figure out just how I was supposed to define the various facets of an overloaded method in TypeScript.

In TypeScript, when you overload a method signature, there is still only one implementation of the method. As such, overloading a method doesn't change the base behavior of the method - it only changes the way in which TypeScript will validate the inputs and return value of the method. This means that our base method needs to accept every combination of inputs - as defined by the overloaded signatures - and manage internal control flow based on arity and explicit type checks.

This really tripped me up at first. If your base method signature doesn't account for one of the overloaded signatures, TypeScript will throw the following error:

Error[TS2394]: Overload signature is not compatible with function implementation.

To see this in action, I wanted to create a DogStatsD-inspired .count() method that accepts the following invocation patterns:

This method is particularly interesting because the 3rd argument can be one of two different types depending on the number of inputs supplied at invocation time. And, it can accept anywhere between 2 and 4 arguments. Luckily, with method overloading in TypeScript, the type annotations add a lot of clarity:

Now, if we run this TypeScript file through ts-node, we get the following terminal output: 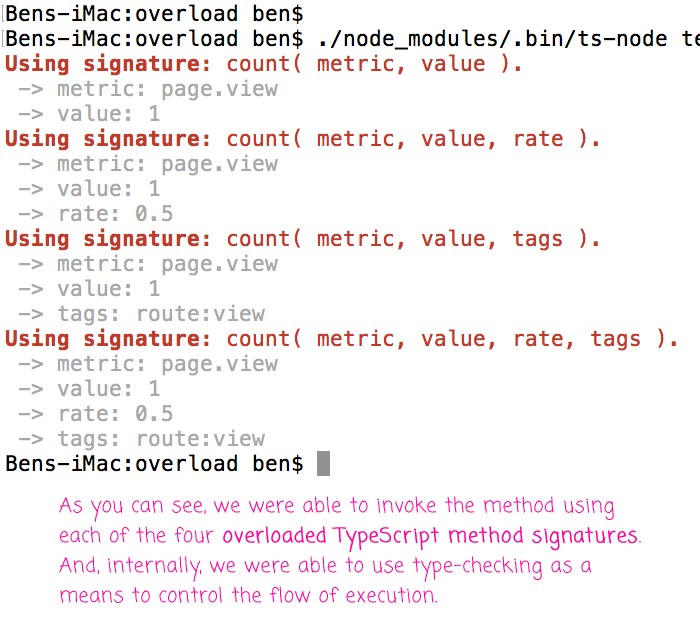 As you can see, we were able to invoke the overloaded method with each of the four accepted signatures. And, by using internal type checks, we were able to control the flow of execution within the base method body.

Now, this isn't quite as clean as a language like Java in which each overloaded method signature gets its own method body. But, the type annotations of the method overloading in TypeScript add a lot of clarity to the dynamic nature of JavaScript. And, since we get to lean on TypeScript for the input validation, our internal control-flow logic only needs to differentiate between signatures - we don't really need to validate all the inputs. That's a subtle but powerful point.

When possible, I try to avoid method overloading since it creates a more complex API, both in terms of consumption, but also in terms of tested and implementation. That said, the type annotations of method and function overloading in TypeScript bring a much-welcomed clarity to the dynamic nature of JavaScript. Just make sure your base method is compatible with all the overloaded variations!

This is a nice intro to overloading, but I'm afraid you're able to omit the type annotations for the base method only because you're probably running with strict mode disabled. Turn it on and this will no longer be the case.

Ahhhh, very interesting point. I just looked back at my demo code and in-fact I don't have a tsconfig.json (usually I do). I'll have to go back and add one and see what happens. Much thanks for the feedback.

By the way, you were totally right! With a tsconfig in place, I did get an error about the type. Excellent catch. I had to put :any on the optional arguments.

This is a really nice article. One question though, do you also have an example for function overload, as currently in the example, you show only for methods (function belonging to a class).
I'm interested to overload an actual function and I tried it with an interface but it fails for the return type.

That's a great question. I haven't tried that yet -- let me see if I can get this working. Offhand, I would guess that the issue is that you are not providing a base-case for the signature (ie, a signature that takes any or number|string as the second argument). But, I'll will experiment and report back.

The issue seems to be on the return type and not the parameters, because if I implement the method with return type any, it will work:

const numberOrString: NumberOrStringMethod = (input: string, type: 'string' | 'number'): any => { return type === 'string' ? input : +input; };
But this way, I'm required to be extra careful with the return value inside the function implementation.
Please let me know of you progress when you have time to play with this.

So, I think the problem is that the inline function doesn't actually adhere to the Interface. Meaning, the Interface strictly maps the number to number and the string to string. But, the function implementation you provide isn't actually doing that. It's only saying that you can accept either a string or a number and you return either a string or a number - it doesn't guarantee that you'll return a string if you get a string or that you'll return a number if you get a number. Intuitively, we know that's what it's doing when we look at the implementation; but, the TypeScript compiler doesn't know that.

If we take your approach and convert it to a Function definition with the proper signature overloads, things do work:

Here, I'm assigning my implement, myCallback to a variable of type Callback. Of course, at this point, we lose the fat-arrow notation (and the this binding). I think we can approach this from a different angle. Let me try something.

Ultimately, I think the problem is that we keep thinking about the problem from what we know is going to happen at runtime; but, the TypeScript compiler doesn't know about runtime -- it only knows about what it can infer at compile time. So, even if we know that we'll only pass a callback of a certain signature at runtime, TypeScript can only infer from the types provided in the signature.

What I mean is that I think TypeScript is working as expected.

That you for your time and assistance, it helped become a better developer. :)