For the last few weeks, I've been trying to build a Circuit Breaker for Node.js. The core concept is based on the Circuit Breaker that I built for ColdFusion; but, given the fact that Node.js / JavaScript is a different language with a very different non-blocking paradigm, the code is similar in intent but different in execution. That said, I think I finally came up with something that is worth sharing. 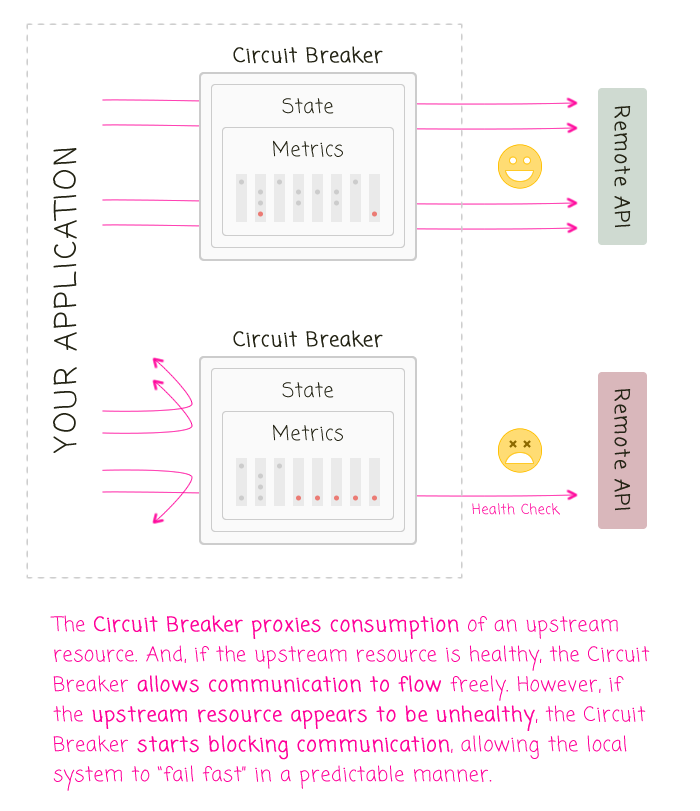 For this post, I'm essentially copying the contents of the currenty ReadMe file:

Each Circuit Breaker is a composition of several objects that work together to provide the tracking and the fail-fast functionality. Fortunately, you don't have to know about this unless you are building custom implementations. All you have to do is ask the Circuit Breaker Factory for an instance with the given settings.

As you can see, there are three ways to run commands through a Circuit Breaker:

Each execute* method returns a Promise that will be fulfilled in resolution if the execution was successful; or, fulfilled in rejection if the execution threw an error (or was bypassed based on the state of the Circuit Breaker). The underlying method / function that is being invoked should return a Promise or a synchronous value. Or, it can omit a return if none is needed.

NOTE: The duration of the rolling metrics window will be (bucketCount * bucketDuration). This is also the amount of time that the Circuit Breaker will remain opened after failing before allowing a "health check" request to execute.

But, they can also be provided at the time of execution (regardless of whether or not a global fallback value was provided):

Circuit Breakers Are Scary - What If I Get It Wrong?

Luckily, you don't have to dive right into the deep-end. Instead, you can deploy a passive Circuit Breaker that will log all of the traffic; but, will never fail open, no matter how unhealthy the upstream resource becomes. This way, you can spend some time passively gathering metrics about your API usage (including counts, durations, and errors) before switching over to an active Circuit Breaker with tailored settings.

Since this is a passive Circuit Breaker (that never opens), there are fewer settings:

Once you've had a chance to monitor your Circuit Breakers, you can start switching your .createPassive() factory calls with .create() factory calls using settings that you know correspond to the collected base-line of metrics. And, you can sleep well at night.

By default, the Circuit Breaker quietly discards all internal events. However, you will probably want to log Errors and record StatsD metrics in your application. To do this, you can provide a logging Function as the monitor argument:

This logging Function will be called with the following eventTypevalues:

However, if you extend the Monitor class, you can override any of the log* methods:

The Monitor class provides the following default, no-op (No Operation) methods, which means you only have to override the ones that are meaningful to your application:

Building Your Own State Implementation

Once you have a custom State implementation, you can construct a CircuitBreaker:

Since the Circuit Breaker generates and returns Promises around the execution of black-boxed commands, many of the methods on the State instance will be invoked asynchronously. However, the following series of methods are guaranteed to be invoked synchronously within the same tick of the Node.js event loop:

Since Node.js runs in a single process, you can assume that these four methods will be called without any race conditions.

All Metrics Should Be Stored In-Memory

If you are building your own State implementation, you may be tempted to share metrics across different Node.js processes (or machines). For example, you may be tempted to store metrics in a shared Redis instance that can be consumed be every instance of a Circuit Breaker that proxies a single resource. DO NOT DO THIS. Not only does the Circuit Breaker expect State methods to run synchronously; but, trying to share state offers no real value-add. Since the failure-tracking is based on percentages, sharing state won't make the percentages more accurate. In fact, sharing state across processes could lead to false-positives if a particular process or machine is having issues (such as configuration issues that don't affect other processes or machines).

Anyway, this was a lot of fun to build. Hopefully, I'll get to try it out in production. If nothing else, this was a wonderful code-kata - it really made me think more deeply about code composition and separation of concerns. Also, this is the most unit-testing I have ever done!

So, while I was researching node.js circuit breakers, I kept coming across the following line of code (in various implementations):

... the more I noodle on it, the more I think it should be the exception and not the rule.