I'm just starting to learn about using Express.js to build web applications in Node.js. As such, a lot of stuff that may be obvious to Express aficionados still leaves me scratching my head. For example, I was curious about how to track the request timing / duration of requests that were served-up using Express' static file server. Since the static files weren't attached to a particular route prefix, I didn't see how I could attach middleware specifically to those static asset requests. But, then it occurred to me: I don't have to care about how the request starts, I only need to care about how the request ends. And, in the end, I can differentiate between route and non-route requests.

As a request, in Express.js, is passed down through the tree of middleware handlers, both the Express framework and the individual middlewares each have an opportunity to augment and monkeypatch the various streams as they deem necessary. This means that at the end of a request, the properties on each stream represent the request's path through the application and its registered middleware.

To see this in action, I created a simple Express.js application in which the very first middleware is the request duration tracking. I am setting this up as the first middleware so that the rest of the request processing (such as body and cookie parsing) will be taken into account when calculating the overall duration. Notice that in the onFinished() callback, I'm inspecting the "request.route" property to shed some light on how the Express.js application routed the incoming request:

The onFinished() binding doesn't care how the underlying stream was consumed, whether it resulted in a JSON response, a rendered HTML template response, or a static file server response. To the onFinished() utility, it's all just "stream events." This works in our favor because we also don't care how the request / response streams were consumed - we just care how long they took to consume, which is the delta between the first middleware and the shipping of the last byte to the client.

When we load this Express.js application and request a few pages in the browser, we get the following terminal output: 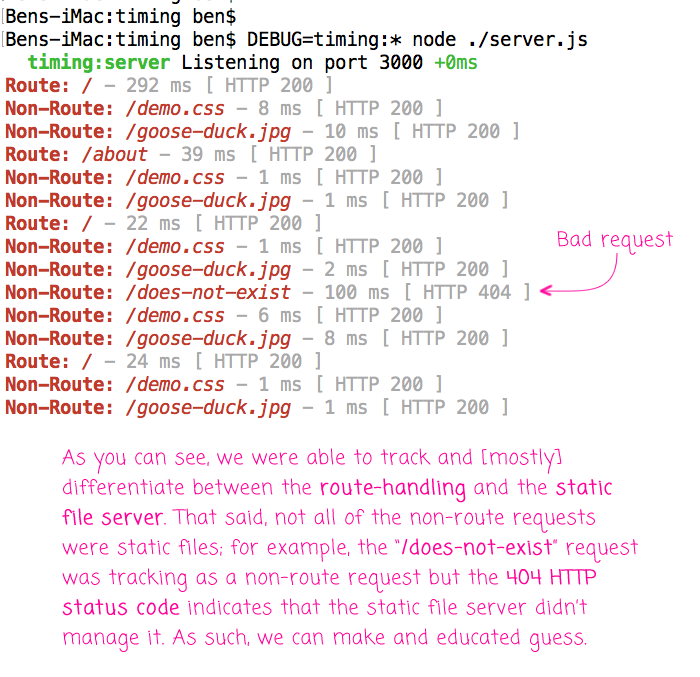 As you can see, our request tracking middleware is able to differentiate between the requests handled by the route-handlers and the requests handled by the static file server. Well, mostly. Not all of the non-route requests end up routing through the static file server. "Not Found" requests, for example, lack a "request.route" property but aren't static files; that said, we can always inspect the HTTP status code of the response to make an educated guess based on the rest of application configuration.

I'm basically on day 4 of Express.js learning. So, I'm in the process of building up a better mental model of how Express handles requests. This is the first time I've really dealt with a plugin / middleware based system. So, for me, it was not obvious how I might go about tracking the request duration of static file response. But, the more I wrap my head around middleware, the more clear this is becoming.

One of the good things (imho) about the Express model is that it is "modules all the way down" - so if you want to have a different approach for statics than default,
you either configure static a bit more ref https://github.com/expressjs/serve-static/blob/master/index.js
Or just replace it with another middleware for your use case (electricity, ...?)

Yeah, it is pretty cool. I'm starting to get a better mental model for it. It's basically just a stack of Functions that can do whatever they want. The next thing I want to try and do is create a middleware that creates a more seamless mapping between routes and views to see how a view might be rendered implicitly rather than explicitly.

Just having fun with it :D