The other day, I was developing a Promise-based workflow when I ran into a little dilemma. I had a situation in which I needed to raise an exception. But, the path forward, in the heat of the moment, was suddenly unclear; since I was already inside a Promise chain, should I throw the error or reject the error? Luckily, I didn't have to think about this too deeply because IE (Internet Explorer) forced me down the right path. In IE (both 10 and 11), the .stack property of the Error object isn't actually populated until the Error object is thrown. As such, you must throw the Error object in order get a proper stack trace in a Promise Chain (or anywhere else, for that matter).

To see this in action, I put together a tiny demo that rejects a Promise in two different ways: first, with the reject() function and second, with the throw() operation: 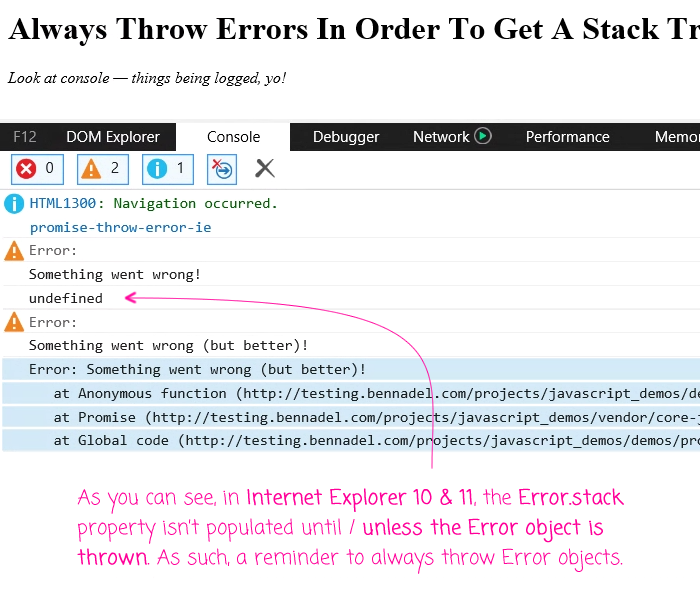 As you can see, only a thrown Error provides a stack trace in IE 10 and 11.

In hindsight, my confusion seems silly. Of course you throw() Error objects - that's the whole point of creating an Error object. But, at the time, with the reject() function right there, I suddenly felt unsure of myself. Thankfully, IE was there to steer me in the right direction (and how many times do you get to say that in your life!?).

Tweet This Interesting post by @BenNadel - Always Throw Errors In Order To Get A Stack Trace In Promise Chains https://www.bennadel.com/go/3228