CAUTION: This post is basically a "note to self" exploration.

One of the main reasons that I wanted to read Exploring ES6 by Dr. Axel Rauschmayer was that I needed to learn more about ES6 Generators. At work, some of the engineers have been using ES6 Generators to make asynchronous code look and feel like synchronous code. Which is super awesome; but it is, at the same time, a total mystery to my primordial ES5 brain. What I didn't realize, when reading that kind of code, was that the most important aspect of the code was completely hidden away. This post is an attempt to look at that "hidden" code as a means to gain a more holistic understanding of how ES6 generators can be used to manage asynchronous workflows.

On their own, ES6 generators aren't necessarily "asynchronous" in nature. They are just iterable. They are like little state machines that iterate over yield-delimited portions of the generator function body. This iteration can be performed synchronously or asynchronously, depending on the calling code; the generator doesn't care one way or the other.

For example, here's a generator function that is being consumed synchronously:

Notice that all of the console-logging appears in the terminal in the same order in which it was defined in the code. This is because all of this code executed synchronously; there's nothing implicitly asynchronous about generators.

If a generator function yields data structures - like Promises - that are asynchronous in nature, the generator is still synchronous; but, we definitely have to be more conscious about how we consume the yielded data. To demonstrate, let's take the above code and wrap each line in a Promise:

Here's we're still iterating over the generator in a synchronous manner, using the spread-operator to convert it to an array of Promises. But, we understand that the yielded data is asynchronous in nature; so, we wait for all of the lines of poetry to resolve before outputting the result. And, when we run the above code, we get the following terminal output:

As you can see, the console-logging appears in a different order in the terminal because the consuming code had to wait for the promises to resolve asynchronously before all of the logging could be completed.

In the above code, we're allowing each yielded promise to resolve in parallel. And already, the code is a good deal more complex than our original version. If we wanted the promises to resolve in serial - meaning one after another - that's where things get especially complicated.

In order to take a generator object that iterates over asynchronous data and have each step run in serial, we have to examine each yielded value, wait for it to resolve (in the case of Promises), and then take the resolved-value and pass it back into the next step of the generator's iteration. 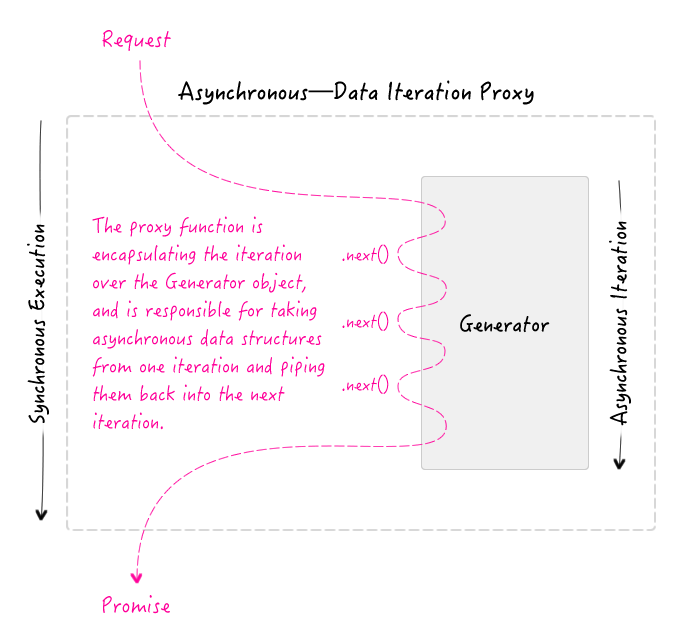 Here, we have some proxy function that synchronously receives a request and returns a promise of a final result. Internally, it then iterates over a generator that is yielding asynchronous data structures. In most of the ES6 Generator code that I've read, this asynchronous control-flow is completely hidden behind methods like Bluebird.coroutine(). This reduces the complexity of consumption; but, when you're trying to learn about how this all works, this encapsulation makes it much more difficult to understand.

In order to bring transparency to the asynchronous flow of control, and to try and wrap my head around it, I wanted to put together a demo that includes a simplified version of one of these "coroutine" proxies. In the following code, we have a generator function that yields promises:

We're going to proxy the iteration through this function body such that we can return a single promise that represents the serial asynchronous execution of this code. But, before we do, it's important to understand the dual-nature of "yield": it produces a value and pauses execution; but, at the same time, it also provides a placeholder for the input to the next iteration. In a sense, a single yield acts as both an output and an input.

If we look at this line of code:

... the first call to .next() will result in an InterationResult whose value is "b" (yield as output). This code will then pause on the yield, waiting for us to call .next(). And, when we do call .next(), we can then pass-in a value which will replace the "yield" (yield as input), storing the value into the variable "a".

In the following code, my simplified version of this coroutine logic is as the bottom:

As you can see, this is complicated stuff, so I tried to leave a lot of comments in the actual code. Internally, the iteration proxy kicks off the iteration of the generator in a recursive function that builds a promise-chain. The promise-chain is allowed to build up asynchronously while the base promise is returned synchronously from the proxy invocation.

When we run the above code, we get the following terminal output:

As you can see, the "user" and the "friends" were both gathered asynchronously, in serial.

Once you see the complexity involved in managing the asynchronous iteration of the generator object, you can understand why it's encapsulated. But, when you're first trying to learn about generator functions and how generator iteration works, this encapsulation can make things much more confusing and overly magical. For me, pulling the curtain back, so to speak, makes it possible the follow the logic and build up a proper mental model. And, once I have the right mental model, I can comfortably welcome the encapsulation back into my asynchronous life.

As a quick follow-up to this post, I wanted to take a look at performing parallel data-access inside a workflow-driven generator:

I think when we see this kind of yield-based workflow, its going to be very easy to forget or *overlook* that some data can be accessed in parallel. This follow-up post just looks at how tasks that can be run in parallel can be done inside the generator-based workflow so as to leverage the beautiful asynchronous nature of JavaScript.

What is the point using generators, when result is promise? Why not just use promises here?

... could end up being reduced to something like this:

... functionally, this code is basically the same. But, syntactically, the generator-based workflow is a little more concise and a little more like a blocking, synchronous language.

But, it's just personal preference - one version of the code isn't objectively better. The latter version clearly has more "magic" baked-in, which does make it harder to follow (while ironically perhaps easier to understand).

I noticed that this does not handle nested yields. The work around is not to yield within a generator function but instead use this generator proxy wrapper to call it as a function.

I wonder if this this wrapper could check for iterator return values then returned a recursive invocation of itself.