In the one-way data flow philosophy embraced by Angular 2, you don't often have to cancel a component's output event directly; if a component emits an output event that you want to cancel, just don't pipe the event data back into the target component. But, I don't think it's wise to try and reduce every component down to a set of input bindings. Of course, this means that we'll sometimes need a way to cancel output events that don't correspond directly to input bindings. In those cases, I wanted to experiment with emitting actual Event objects, instead of event data, that can be canceled by the calling context.

A specific scenario that comes to mind is that of an upload widget. An upload widget might have many states and maintain an internal queue of files and have a lot of logic around how files are organized, filtered, and prepared for transport. To try and shoehorn that entire ecosystem into a set of input binding - controlled by a uni-directional flow of data - may be way more trouble than it's actually worth.

That said, there will likely be parts of the upload workflow over which the calling context might need to exercise control. In those cases, I think we can borrow from the browser DOM (Document Object Model) and have the upload component emit cancelable events. Then, if the calling context needs to cancel the operation, it can call something like .preventDefault() on the emitted event value.

First, let's look at the root component, which will consume the file-upload component:

Now, let's look at how the FileUploaderComponent generates, emits, and checks the state of the event object. The most relevant part of this component is the handleDrop() method:

As you can see, when the files are dropped on the uploader, the uploader loops over each file; and, for each one, it creates a new FileAddEvent instance and emits it. After the event is emitted, the uploader then inspects the FileAddEvent object to see if the calling context prevented the default behavior. And, if so, it omits the given file from the uploader queue (which is not part of the demo).

The FileAddEvent object itself is super simple - it's basically one private property with an accessor and a mutator for the default behavior.

Now, if we were to run this code and drop a mixture of JPG and PNG files on the uploader, we can see that the root component is able to blog the PNG files from being processed: 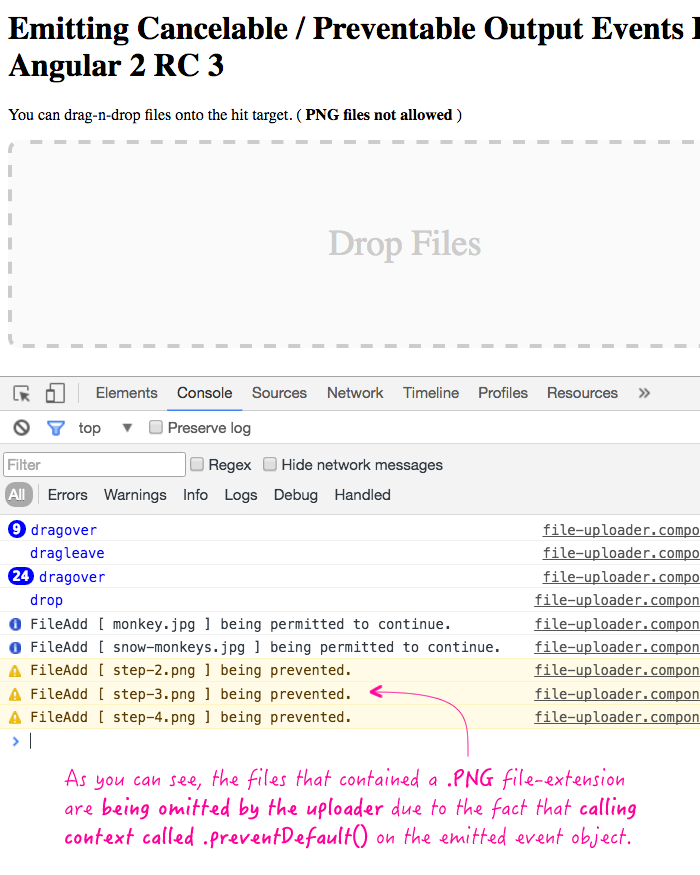 As you can see, while the file-uploader isn't being driven by its inputs, the emitted event is still allowing the root component to retain control of the general upload process.

When it comes to a uni-direction data flow, I think the biggest wins come from situations in which a component can be completely stateless. Meaning, it's rendering is driven entirely by its inputs. But, with something like an uploader, it is necessarily stateful as it has to deal with the transmission of files which is a stateful process. As such, it cannot [easily] be controlled by inputs alone. And, in cases like that, I think that emitting cancelable events, in Angular 2, bridges the gap by keeping the calling context involved in the control flow of component state change.