Yesterday, I posted a tweet about how I am sometimes tempted to use a Try / Finally block as a way to get around creating an intermediary variable. I've never actually done this, as I think it's a bad idea. But, so help me, I have been many times tempted. And, while I still don't recommend it, I thought it would be interesting to see, from a technical standpoint. 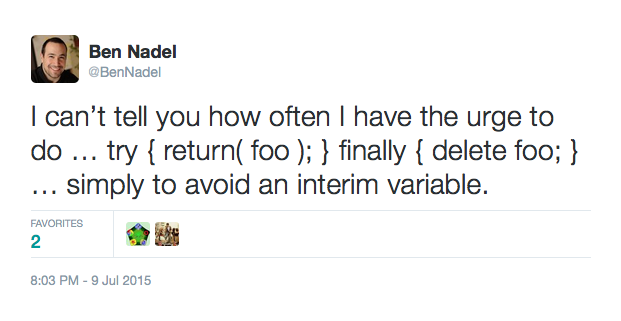 Something about this little dance just gets under my skin. I'm not sure why exactly - it's just one of those things. So, sometimes, in my dark moments, I'm tempted to side-step the intermediary variable by bastardizing the "finally" mechanism in a Try block. To demonstrate that this works, I'm going to "extract" two keys from a cache and log them to the console:

As you can see, the extractItem() method executes the return() and then the delete(). This actually reads quite nicely, in terms of an order of operations (which is probably why it's such a temptress). And, when we run the code, you can see that the correct value is returned and the correct keys are deleted:

It works, but here's why I'll never do this:

NOTE: There is probably a performance overhead as well; but, it's so marginal that I won't even consider it as a negative.

Anyway, just needed to get that off my chest. In a perfect world, the "delete" action would just return the value and then I could sleep soundly at night.

Tweet This Interesting post by @BenNadel - Sometimes I'm Tempted To Use Try / Finally In The Worst Way https://www.bennadel.com/go/2862

So you're not happy with the delete operator. Why not create an abstraction that has the semantics you expect?

FWIW, deleting a key and returning the (previous) value at the same time violates command-query separation.

In the code that actually triggered this thought last night, I actually took that kind of approach. I had methods for .setItem(), .getItem(), and deleteItem() that all work like you would expect. But then, I created a subsequent method called .extractItem(), which encapsulated the intermediary-variable:

That said, I am not sure that it necessarily violates Command/Query separation. I mean, in the purest sense, I guess so. But, the intent of the method is perform a specific mutation. As such, the "side effect" isn't really a side-effect, it's the thing you're trying to do. But, just a thought.