In my demo yesterday, on consuming a Crypto Hash object as a Stream in Node.js, I ran my demo inside of a process.nextTick() callback. I did this in order allow my demo code to be fully defined before I consumed it. Sometimes you need this; sometimes you don't. It depends on what values are being hoisted and how those values are being used. Since this is often a point of confusion for people new to JavaScript, I thought it would be worth a quick exploration in Node.js.

First, let's take a look at a demo that won't work. In the following code, I'm trying to consume a Writable Stream sub-class that is defined later on in the same file:

As you can see, we try to instantiate the SomeStream() class and then write to it. When we run this code, we get the following console error output:

It's important to understand where this is failing. The error is not in the instantiation of the SomeStream() class - in fact, the instantiation worked. The error occurs when we try to call the .write() method on the resultant object. The .write() method is part of the Writable stream prototype. But, our SomeStream() class didn't actually have a chance to extend the Writable stream.

The reason for this is that, while the Function declaration for SomeStream() was hoisted to the top of the code, the .inherits() and the .prototype references were not. So, while the SomeStream() class is technically available, it was only partially defined at the time I attempted to consume it: 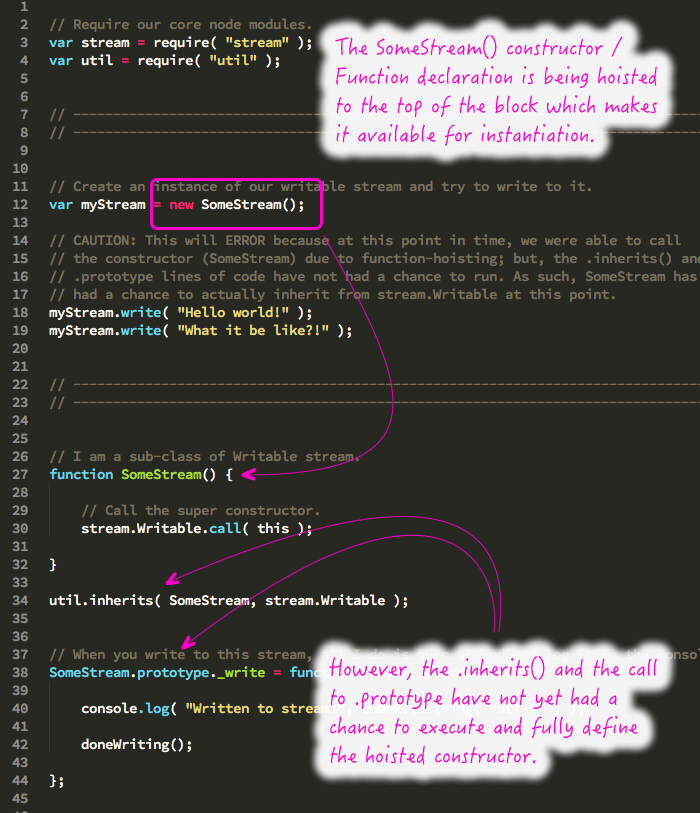 When I do this, the entire file executes before my demo code actually "runs." process.nextTick() is kind of like the scope.$evalAsync() method in AngularJS - it doesn't actually delay the execution in terms of event loop iterations; it really just moves the execution to end of the current event loop cycle.

So, if my process.nextTick() callback gets executed at the end of the current event loop cycle, it will execute after my SomeStream() class has been defined, including the call to .inherits() and the .prototype assignments.

NOTE: I am not saying you should write demo code this way - this is more a matter of personal style than anything else.

Now, in a real Node.js application, this rarely matters because the call to require() is synchronous. This means that when you .require() a JavaScript module, the entire file executes before the require() call returns. As such, you never have to worry about the timing of the calling context and you can safely export a class Constructor at the top of the file: 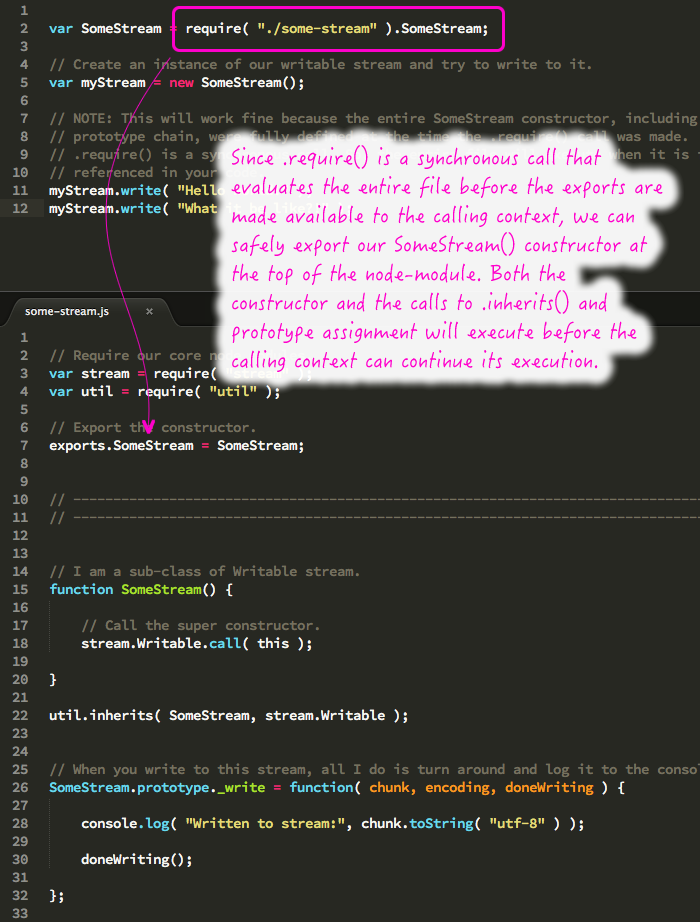 Unless you're writing a Node.js demo, you probably won't need process.nextTick() in your main execution path. But, I think it's important to understand how Function and Variable hoisting work and what problem process.nextTick() is solving in this scenario. Of course, process.nextTick() has other purposes, such as ensuring asynchronous execution. But, that's beyond the scope of this post.