Now, an object literal expression poses an interesting situation for a one-time data binding. According to the documentation, AngularJS uses a "value stabilization algorithm" in which it will continue to watch an expression until it results in a defined value. But, with an object literal expression, the top-level value - the object - is always defined. As such, you would think that the $watch() binding would immediately deregister itself.

As it turns out, however, this is not the case. If you dig through the AngularJS source code, you will find that AngularJS makes a special logic branch for object literal expressions. In that branch, it examines all the key-value pairs in the resultant object. And, it only deregisters the $watch() binding when all of the keys have defined values.

To see this behavior in action, I've put together a small demo in which we set up a one-time data binding for an object literal expression with two keys. Both keys start out with undefined values which can be defined independently by the user.

Note that we have to perform a deep-object comparison for the object literal $watch(). This has nothing to do with one-time data bindings; this is done in order to prevent an infinite digest loop (which would result in a new / dirty object at the end of every digest iteration).

Using the links, we can define and increment each key-value independently. And, if we set the first value a few times and then set the second value a few of times, we get the following console output: 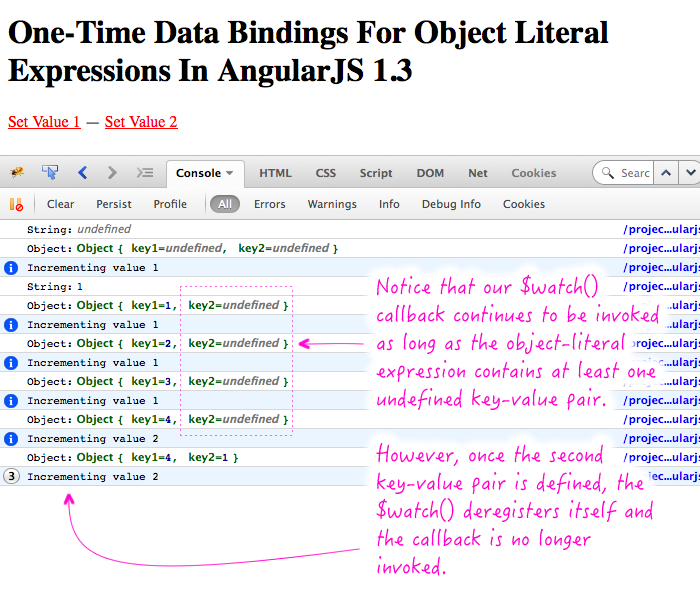 As you can see, as we incremented the value of the first key, our $watch() callback continued to be invoked. It was only after the second key was defined that our one-time $watch() binding deregistered itself.

I think this was definitely a smart move on behalf of the AngularJS team. Without this approach, the one-time data bindings wouldn't be usable for directives like ngClass and ngStyle. Well done!

Thanks for another great tutorial. I have one question about this feature. When one-time data binding is used with an object literal expression, does it invoke a "de-registered" event when all elements have defined values and the object is no longer watched? There may be a use case for this event when a page needs to render async data.

For example, let's say you have a 5-panel "featured news" carousel with images, article description, and url for the article. Data is aggregated from five separate feeds. The first object in each feed is featured news article information for it's panel in the carousel. I could use a simple object like {feed1: xhrData1, feed2: xhrData2, feed3: xhrData3, feed4: xhrData4, feed5: xhrData5 } to represent data in this carousel. Perhaps it makes sense to watch for a de-register event so carousel animation can begin once all async data populates the object. Do you think this would be a valid approach? What are your thoughts?

Thanks for your time.

I did a quick google search because I was sure others must have run into the same problem. Glad I found your article.

Submitted a pull request which links to your article for https://docs.angularjs.org/guide/expression to add this special case. Hopefully the documentation will get updated.

Can you give a bit more detail about what problem you were running into? It's not clear from your comment what your problem is, but I am curious.

That's a really great question! Sorry for not responding sooner. If you know that your data is going to take a while to aggregate, then I don't think you can use the one-time binding as I don't believe it is really meant for such a use-case. To me, the one-time binding is for stuff that is ready to render once and then never again.

That said, you can *still* use one-time binding if you need to aggregate data over time. The way I would approach that problem would be to defer the DOM until the data is available. Then, once it's available, use the one-time binding.

So, for example, some pseudo code:

This way, you don't render the carousel DOM until the `isDataLoaded` flag is true, which you can control when you are loading the data from your various sources.

I want this expression

In angular-once (https://github.com/tadeuszwojcik/angular-once) I used `once-wait-for` to indicate this. So my code looked like this:

In order to replicate this behavior using Angular's built-in one-time binding syntax, I wrote the expression like this:

because I knew the expression would get watched until it resolved to a defined value.

I did a quick Google search for "angular one time binding undefined" to see if my approach was correct or if there was a way to specify a "wait for" condition that I didn't know about. That's how I found your article.

After reading your article I reread Angular's documentation (https://docs.angularjs.org/guide/expression) and noticed they didn't mention that object literal expressions are treated differently than simple expressions. So I created a pull request to update the doc by adding a section under the "Value stabilization algorithm" section that links to your article.

I think I will keep my code as

because that still seems like the only way to have a one-time binding that waits for a condition. Is there a better way?

My angular documentation pull request has been merged, so this article is now linked on the Expressions page of the Developer Guide: https://docs.angularjs.org/guide/expression#special-case-for-object-literals

Thanks for all your posts!
Philip

Thanks Ben, you answered my exact question of whether one-time data bindings were appropriate for ng-class!