The Wrestler, starring Mickey Rourke and Marisa Tomei, finds fictitious wrestler, Randy "The Ram" Robinson, 20 years after the height of his professional wrestling career. He is no longer performing in arenas on pay-per-view with a crowd of 80 thousand and another 40 million television viewers; he's an "old, broken down piece of meat" that simply survives long enough to make it from one community-center wrestling match to another, performing for crowds of two dozen and a couple of bucks. 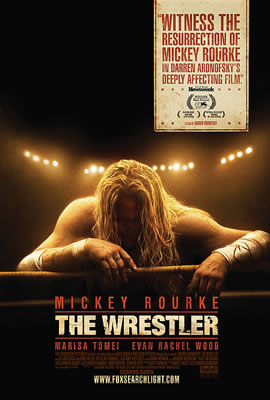 I wanted to see this movie from the very first moment I saw the preview; it looks like a great under-dog movie. And it was - I really really liked it and I'll probably see it again in the theaters. But, it's definitely not a "feel good" under-dog movie. It's not a "Rudy" or a "Cinderella Man" by any means. The Wrester offers an insight into the world of professional wrestling that we never see, and, I have to say, it's quite depressing.

But, part of why it's such a depressing movie is because The Ram, played by Mickey Rourke, loves wrestling. It's his passion - it's all he wants to do; he can't imagine doing anything else and pretty much won't stand for the thought of such a thing. And yet, at the same time, it is his very passion that has stripped his life of all those that cared about him and it is this passion that is quite literally killing him. 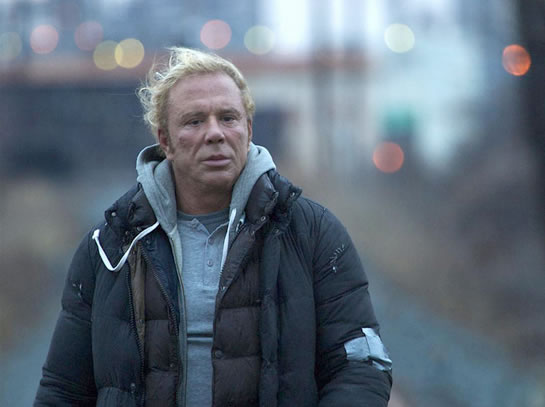 I have to say, I definitely got emotional during this movie. The performances were great, but more than that, I think it really struck a chord in me. I love working out more than most things; and, I know that when I am injured and cannot work out, it has a large negative impact on almost every aspect of my life. And yet at the same time, I know that many of my injuries are cause by this love of working out (mixed with carelessness and a good bit of laziness). While working out and wrestling entail very different things, it was easy for me to relate to this concept of having to choose between your passion and your health.

On top of that, I don't think there isn't anyone here who hasn't thought or worried about ending up alone. I believe that to be a universal fear that everyone has at some level whether it be a driving force in their lives or simply something that pops into their head from time to time. Regardless of how you feel on this matter, it's very hard to watch this man, once on the top of the world, look up 20 years later and realize that he has no one in his life and that he'll die alone. When you're already in an emotional state, it's quite tempting to stop and ask, "Will that be me?" 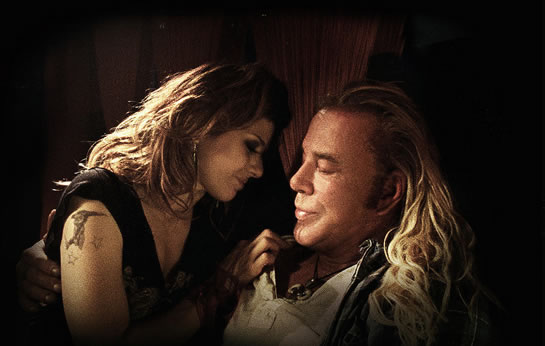 Marisa Tomei does a great job as well. In a way, her story as a stripper is much like his - she's alone and definitely too old to be doing what she does for a living. But, just like The Ram, she is doing whatever she can in order to survive for her passion - her son. You'd think that these two would go well together; but, ironically, while they are both alone, they are simply too broken to find each other.

Ever since I saw Sin City, I have thought of Mickey Rourke as a top quality actor. Now, with the Wrestler, I think he has solidified his standing in the Hollywood crowd. I highly recommend this movie, but be warned - you're not gonna leave the theater feeling great.

I saw a preview for this at the local arthouse theater when I went to see JCVD. At the time I thought that it looked a bit too much like a redone Rocky IV, but I appreciate the more in-depth review you've provided. I'll have to check out the showing schedule and see if I can make it to one. Otherwise, it'll be a Netflix to torture the wife with.

(P.S. - JCVD didn't suck nearly as much as I thought it would. It was pretty amusing, actually. Even with the subtitles.)

I had not seen the trailer for JCVD. I think I saw the poster somewhere, but I had no idea what it was. I just checked out the trailer on YouTube:

Looks really strange. I am not sure if I get it; is it basically a fictitious story about Jean-Claud Van Damme starring the real actor?? Looks funky.

If you are a Mickey Rourke fan, this is a must see.

Not only as a parallel to his own tribulations, but a true rendition of what a wrestlers life is really like.

The deli scenes are a blast and it was good to see comic Todd Barry as his boss shoot wise at one who could crush him in his hands, but couldn't due to his need.

Marissa shows it all too, and probably why George Castanza had such a crush on her so long ago. Now I do too!

Yeah, the deli scenes were funny.

Are you trying to tell me that Marisa Tomei likes short, stocky, balding men :)

That may mean it actually gives guys like us a chance!

Hope it means more movies for MR too. Good to see
him back in the saddle. Hear there are 2 more coming.

Are we the only 2 peeps who are interested in MR's future as an actor?

Or are we the only 2 peeps familiar with Kinky Solutions web site?

Do you help develop web sites for others too?
rates as rea$onable as elance providers?

In all fairness, I think The Wrestler is only in limited release right now, so maybe not many people have had the chance to see it yet.

And yes, I do develop web sites, but I am certainly not competitive with eLance.

Too bad. Could use the help.

JCVD is essentially, as you've described it, a fictional story involving him as both the actor and the main character. I'm not going to say it is Shakespeare or anything, but I will say that it's easily the best film of his that I have seen. (Take that for what it is worth.)

He seems to have a pretty good sense of humor about his own life and condition that shows through. If you can step back and laugh with him, then it's an enjoyable film.

Similarly, if you can enjoy a story which boils down to "he's just a regular guy with regular guy problems", then you'll enjoy it. Like I said, it's not art, but it doesn't suck either.

Sounds fun to me. I'll be sure to check it out.

thanks for mentioning this movie. Just saw it tonight and I might have overlooked it.

Word has it, Mickey is slated to two more in the coming year.

He's been a NYC badboy for some time and felt I should
campaign for him. He needed everything he could get to
get back in the Hollywood game.

In fact, the producer had to accept less money because he
wanted MR in it and the company didn't. Then told MR if
he acted up in any way, he'd be fired without a dime.

Thanks for your Informations

been a wresting fan all of my child hood, this film is old school hard core wrestling. it isn't the style you see on the WE smack down. this goes back to back when Ric Flair first stated, Guys like Black Jack Mulligan, not todays wrestlers. In fact, I see a lot of the old Ric Flair with out the mouth and flash, he's the type that will end up like this before he ever tossed in the towel.

Boy there was a biggggg gap between posts on this one Pat!

Just take a look at the history of these guys. So many dead and short lives.

I don't follow the new gen... I understand it was never real, but it wasn't as obvious back then (well, a little less obvious). LOL!

yep a huge gap and true dat it wasn't as odveus as it is now, now it's just dumb and I HATE all the soap crap they toss in. I stopped watching as soon as Undertaker started talking. The man's mouth should have never opened! LOL

Miss Elizabeth was murdered they think Lex Lugger did it in a staroid rage, but no one has come right out with it.

Just SAD. I have the Black Jack Mulligan book and he tells al ot of stuff you would never thought happened in those days but OMG what a circus life!

Circus life indeed. I go back to the Bruno Sammartino days and even a few of those oldies died from heart related issues. Gorilla Monsoon, Big John Studd, Andre of course, Big Bossman... it's sad.

But hey, I still have some of my sons old action figures to remember them by!

Care to watch WrestleMania IV with me? The uuuuul-ti-mit- wahr-re-orrr!

I remember ALL those guys, remember the Warroir too And Randy Savage.

Wm 1V Wow never got an offer to watch that with anyone before lol well I aint sure it is possible, but if it was, sure.

Old school wrestling fans that go WAY back. we remember those old guys, In a lot of ways, they have earned the respect to be remembered. They gave it all up for a fun filled life that some of us enjoyed the ride. Now it's all about the money, it isn't the way it use to be and the guys aren't the same haeart as they use to be either.

Did you ever see "They Live!" ? His movie claim to fame.

No dialogue, but a good cult favorite. Not a bad sci-fi.

Wrestlmania and rock n roll --- when I had a clear head.

yep saw that movie, LOVEd it Roddy looked good in it too!

I have seen this movie and from that moment I am thinking about it on and on. I felt really sorry for RAM and I wanted to help him somehow :) Mickey Rourke played it great. I loved this movie even if it was sad. It was real.